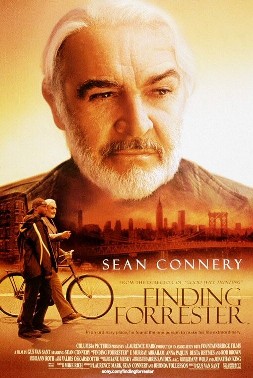 I am not the type of person that likes to watch movies over and over but there are rare exceptions and Finding Forrester is one of them. Just this afternoon I sat down for an hour and a half to enjoy this exceptional film. Exceptional not in its twists and turns because it is predictable nor in cinematography but exceptional in the thoughts and emotions it evokes. No it didn’t get me bawling but it is the kind of film that will stay relevant and strike a chord in people’s hearts because of the truths even as time passes. At least it does that for me, after all it’s been almost a decade since the film came out and about every other year I manage to find time to watch it.

Finding Forrester is about a brilliant young boy named Jamal Wallace (Rob Brown) who lives in the Bronx and is accepted to a very prestigious private school. It centers on his friendship with a Pulitzer prize winner/recluse William Forrester (Sean Connery) and shows how the friendship helped Jamal grow as a writer and William to once again reach for his dreams and come out of his shell.

The movie got multiple nominations and is considered to be one of the best films of 2000. It also won some awards though the Oscars didn’t give it nod. Still director Gus Van Sant really hit the home run with this. If you want a quiet movie night at home this is the movie to watch.