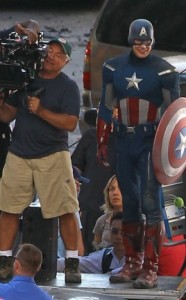 Anticipation for the Avengers movie is rising every day.  It is arguably one  of the most highly anticipated movies that will come out next year. If not for the fact that Christopher Nolan’s Dark Knight Rises movie is also coming out summer of 2012, The Avengers will undoubtedly be the hottest ticket in town during the summer movie season.

The frenzy for The Avengers is being stirred more and more by the sheer number of film set pictures that are flooding the internet. This is highly unusual if you’d go by how other high profile movies that were being shot handled these kinds of leaks. For example, updates on the Dark Knight Rises have been quite few and almost very miserly compared to the amount of images we’re seeing from the Avengers set. At this point, I think this is deliberate. The movie studio is already creating the hype even though the movie’s months away from being released — heck, it’s still filming right now. But the comicbook fanboys won’t be complaining. The leaked pictures will be fueling their daydreams – some of them may even be using the pictures in lieu of internet porn.

The leaked pictures do generate a lot of excitement and if the goal for releasing such a relatively huge number of pictures  is to ramp up anticipation for the movie then they have succeeded. The Avengers will be released summer of 2012. It will star Robert Downey, Jr., Chris Evans, Chris Hemsworth, Mark Ruffalo and a slew of other big name actors. Joss Whedon directs.