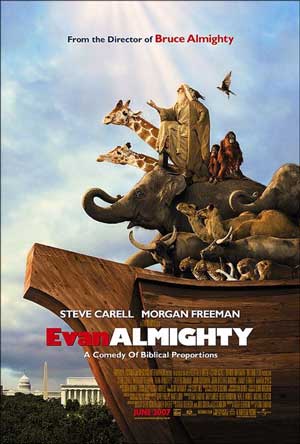 I honestly didn’t know they were even making a sequel to “Bruce Almighty” until the first trailer for this film showed up in theaters a couple months back. It snuck in with little fanfare and wedged itself in during one of June’s down weeks in regards to blockbuster releases. Still, this sort of warm and fuzzy PG-rated comedy is a nice thing to have from time to time, and while “Evan Almighty” isn’t one of the funniest movies I’ve ever sat through, I found myself enjoying it.

Evan Baxter (Steve Carell) is a newly elected Congressman from New York who has just moved to Washington with his wife and three kids. Out to change the world for the better, Evan is a genuinely good soul, albeit a little weird. Unfortunately, once on the job he finds himself in bed with corrupt politicians such as Congressman Long (John Goodman), who want to develop housing in America’s National Parks. Complicating matters to an astounding degree, Evan quickly finds himself receiving orders from God (Morgan Freeman) to build an Ark not only to save his family, animals and the people of his community from a great disaster, but to deliver a message of kindness and goodwill to the world. Evan, however, is not so enthusiastic.

With PG-rated comedies you typically know what to expect. They’re cute and funny, but they’re always more cute than funny. “Evan Almighty” wasn’t what I’d call a laugh-a-minute, and I didn’t even find myself laughing out loud very often, but the story and characters all had a charm to them that kept me enthralled.

Steve Carell brings his memorable brand of awkward and weird humor to the character of Evan. Much like how Jim Carrey’s character of Bruce in the previous film had his little quirk (“Its goooood”), Evan has his one of his own (he enjoys dancing like a doofus). Carell certainly carries the title role good enough. John Goodman doesn’t fair too well as Congressman Long, who’s merely your stereotypical corrupt politician and little more. I like Goodman and all, but he didn’t have much to work with as the movie’s lead antagonist. Wanda Sykes got on my nerves as Rita, Evan’s chief assistant back at the office. She existed mostly to provide sassy commentary throughout the film and felt more like an annoying person sitting in the theater yelling at the screen than an actual character within the movie. And lastly we come to Morgan Freeman, who once again could not be a better choice to play the character of God. Having narrated tons of documentaries and specials, he’s got the omniscient all-knowing voice down, but there’s more to it than that. Freeman just gives off this presence of gentleness and kindness that really sells the role.

I’ve heard some people bash these movies as being “heavy-handed Christian propaganda”, but I couldn’t disagree more. While there are certainly Christian elements to the film (this is a parody of a story from the Bible, after all), the lesson the film tries to convey is one of goodwill, not a straight-up endorsement of Christianity. Personally, I’m Agnostic and I didn’t find the film to be “heavy-handed” at all.

At its core, “Evan Almighty” is a family film and considerably less risqué than “Bruce Almighty”, so it’s a pretty safe way to kill some time with the kids. There are some unremarkable computer effects toward the end during the flood, but the montage of the family working with a legion of trained animals to build the Ark more than makes up for it. You’re probably better off waiting for this film to hit TV, but I’d still recommend checking it out.