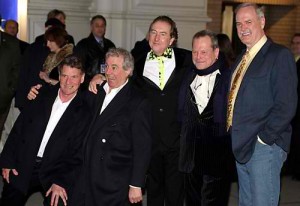 Monty Python fans have long been clamoring for a reunion among its hugely talented and funny members. Now that wish will come true somewhat. The Monty Python gang will all be appearing in a new film, a science fiction comedy called Absolutely Anything.

Now, before you get all excited, take note that the Monty Python guys – John Cleese, Terry Gilliam, Michael Palin – will be lending their voices to the movie, which is a mixture of computer animation and live action. Terry Jones will be directing the film. The movie is about aliens who give a human the power to do absolutely anything. The aliens did this not out of benevolence but as some sort of prank to see how the human will make a mess of things with his new powers. There is talk that Robin Williams will also be included in the movie, voicing a talking dog who actually knows more about what is happening.

If you’re a hard core Monty Python fan then you’d have noticed two names that are missing from the article – Graham Chapman died in the 80s and Eric Idle hasn’t officially signed on yet to do the movie.

Terry Jones is warning fans though that Absolutely Anything is not a Monty Python movie, though he said that it will have some of the sensibilities of the legendary comedy troupe. It may not be the actual Monty Python reunion that everyone is hoping for but this is the closest we’ll get to one and for that we should all be excited.