The movie isn’t really boring, I just thought the headline sounded clever. But like a boring movie, this movie sucks.

You would think that with films like X-Men, X2, Spider-Man, and The Punisher that Marvel would be able to play it safe and stick with a template that works, a template for comic book movies that people would actually want to see. Sure, it doesn’t work all the time (like in the case of Daredevil) but it is a much better bet than having total flops such as The Hulk. With that movie, the problem was that Marvel tried to overshoot its boundaries by hiring a big name fru-fru director whose vision for their character, it was thought, could push for a grander, more transcendent big green monster whose appeal is the ability to jump a lot and smash things. With the Fantasic Four, we get the opposite problem. 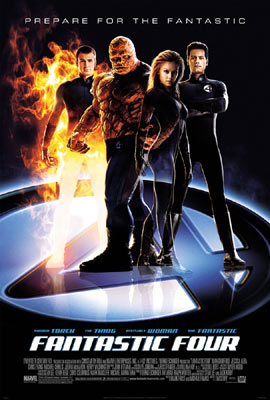 Not being a fan of black culture movies, I have never seen Tim Story’s Barbershop. But I have seen Taxi. Taxi is a lot like a Paul Anderson movie without cool characters. You could say that it sucks. And considering that none of the members of the Fantastic Four are black or cool, well, this movie was essentially doomed the moment they hired Tim Story as a director.

What went wrong? Let’s see… Ioan Gruffudd as Reed Richards? That doesn’t even work from a visual point of view. Jessica Alba as Sue Storm? She may look great, but she can’t act to save her life. Michael Chiklis as Ben Grimm? This had potential, but too bad the script writers thought it would be great to have the Thing spend most of his time bitching about how ugly he is. Chris Evans as the Human Torch? Ok, now I can give some credit: he fits the character well. That is, he plays an egocentric jerk magnificently. And last but not least, Julian McMahon as Victor Von Doom. What? You have your choice of eurotrash actors to play the Darth Vader of comics and you choose the chubby-cheeked dork from Nip/Tuck? He doesn’t even sound menacing! By the time he puts on the mask, you’re expecting some major whoopings and all we get is this little whiney voice coming out of a pretty sweet helmet. Very anti-climactic.

And the story? Heavens, I’d rather spend 2 hours trying to translate Advent Children into decent Engrish before trying to justify this story. Something about a solar storm turning four dudes into superheroes and one jerk into a superjerk and how they’re trying to turn themselves back. Meanwhile, the guy who got turned into a walking pile of rocks bitches a lot and walks into a bar. The bartender says “what’s wrong?” and he says “God… He must hate me” and suddenly a blind black woman turns around and says “SHE doesn’t hate you!” I wish that were a joke, but it’s not. The movie doesn’t even try to be halfway decent. I felt like I paid $6 to be offended for 2 hours. Oh wait, I didn’t pay for it, I let some girl pay instead.