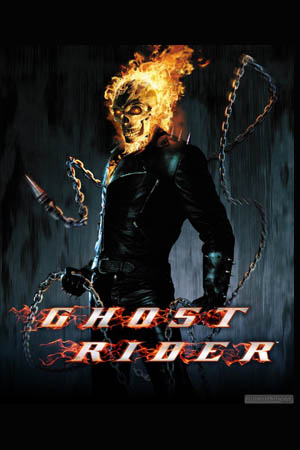 I first encountered Ghost Rider back in the early 90’s at, oh, age 8 or 9. What drew me to the character was pretty much what draws everyone to the character, at least at first. Ghost Rider looks really, really cool. Flaming motorcycles, blazing skulls, black leather, chains…visually, Ghost Rider is like an awesomeness overload. So, of course, Ghost Rider on the big screen, in live action, is a sight to behold. Visually-speaking, that is. As we all know, a movie can’t survive on visuals alone, and while I still enjoyed the heck out of this flick, I won’t deny it had some troubles.

At a young age, stunt cyclist Johnny Blaze (Nicholas Cage) sold his soul to Mephistopheles (Peter Fonda) to save the life of his ailing father. Mephistopheles betrayed him and vowed to one day return to take what is his. Years later, Johnny Blaze has become America’s top stunt cyclist, yet he feels something is missing. His old flame, Roxanne Simpson (Eva Mendez), walks back into his life and Johnny suddenly believes he has gotten his second chance. Not quite. Someone else has come back into his life, Mephistopheles, who forces Johnny to fulfill his end of the bargain. Johnny is suddenly and painfully transformed into the skull-faced Spirit of Vengeance: Ghost Rider. Ghost Rider is charged with the task of hunting down and destroying Mephistopheles’ rebel son, Blackheart, and his trio of elemental demons. At stake are the souls of a thousand evil men, enough to tip the balance of power. Johnny is joined by the Caretaker (Sam Elliot), a mysterious guide who knows more than he lets on.

Screen writer and Director Mark Steven Johnson deserves some serious credit; he really knows his stuff when it comes to Ghost Rider. This movie manages to pack in nods and elements from just about every era of the Marvel comic, fusing the different versions of the character into a sort of hybrid “Ultimate Ghost Rider” (ironically, Ghost Rider has yet to appear in Marvel’s “Ultimate” line of comics). You’ve got Johnny Blaze, the 70’s Ghost Rider, who dresses like Danny Ketch, the 90’s Ghost Rider, with references to Carter Slade, the Western Ghost Rider who predated them both (though, in the comic continuity, had nothing to do with the Ghost Rider curse). There are lots more additions, including Danny’s classic “Penance Stare” and Johnny’s Hellfire shotgun which he used during the “Blaze” comic series in the 90’s (when he went through that brief cyborg phase). It’s like a total Ghost Rider orgasm.

Yet, despite working with so many decades worth of material, Johnson crafted a very strong script which gets just about everything right. Some of the more convoluted aspects of the Ghost Rider are ignored (though not contradicted), such as Noble Cale and Zarathos. But this is a 90 minute movie, so some content shearing is all-together expected. Oddly, they choose to refer to Ghost Rider’s creator as “Mephistopheles” rather than “Mephisto” (his name from the comics), but I just assume that choice was made because the former name is more well-known amongst the general public.

The script is strong and the story and characters stay true to their roots…so what could possibly be wrong with this film? Unfortunately, the problem lies with most of the cast. Nicholas Cage wouldn’t have been my first choice for the character, though he isn’t so awful as Johnny as he is unremarkable. He interjects moments of his trademarked weird sense of humor, which lightens things up (as cool as Ghost Rider is, he’s not one to take seriously) but simultaneously takes you out of the experience because all you can think is “Wow, that’s vintage Nicholas Cage”. Eva Mendez is also a rather weak link, mostly because she’s a pretty weak actress. It’s almost as if Johnson knew this and tries to make up for her flat, amateurish acting with lots of plunging necklines and booty shots. It helps but…not a whole lot. Wes Bentley also delivers an underwhelming performance as Blackheart, delivering some cheesy dialogue a bit too poorly for it to even have comedic value.

So, “great script, bad acting”. What is there left to tip the scales? The aforementioned “Holy crap, Ghost Rider looks awesome!” factor comes into play right about here. While the CGI isn’t up to Lord of the Rings standards, I found it to be more than acceptable. Every scene with Ghost Rider is joyous, thanks not only to how cool he looks but to his downright lunatic personality. Ghost Rider cackles like a madman with an extremely sinister edge to him. This isn’t the friendly Ghost Rider from the 70’s, this guy is nuts. The bits where he blazes down the street in his flaming chopper, melting parking meters and igniting the gas tanks of parked cars is just absolute eye candy. Johnny Cage may come across as a bit weak, but Ghost Rider has enough personality for the both of them.

I suppose the only weak point of the visuals stem from the only weak point of the script: no seriously balls-to-the-wall fight sequences. The bits where Ghost Rider drives up skyscrapers and sets fire to everything in sight are plenty adrenaline-pumping, but the villains in the movie leave a bit to be desired. The Elemental Demons fair very poorly against Ghost Rider, being seriously out-matched, so none of them provide any real sport. There’s Blackheart, but most of that final battle is between him and Johnny Blaze.

Still, there’s always the sequel and the possibility of some more worthy villains, such as Vengeance. And I do so hope they make about a million of these, just so long as the Johnny Blaze-to-Ghost Rider ratio leans decidedly more in the direction of Ghost Rider.

This is a great popcorn flick and an almost all-around worthy adaptation of the comic.