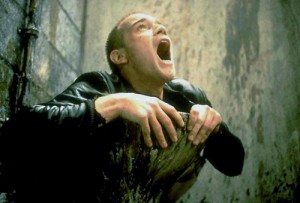 Arrgh! A big horrible ugly ogre with a bold Scottish accent. Yep the first Scottish character to appear in our list is the embodiment of a Scotsman isn’t he? He’s aggressive, brutish, poorly groomed and rarely washed. Above all else he’s anti-social and just ever so slightly grumpy. However, at least he comes to be a likeable character and the accent isn’t bad for a Canadian (Mike Myers). He even gets the girl in the end, even if she does turn out to be an ugly ginger headed ogre. Hmmm, this is quite realistic.

A Scotsman in space and he’s an engineer. Quite fitting for a country that prides itself on a history of some of the world’s greatest engineers and perhaps a tip of the hat in that sense by the Star Trek franchise. Once again however, it’s a Canadian that takes up the role as the ever so slightly gruff Scotsman. I see a pattern developing here.

Taking a dive into the world of cartoons once again and we find Scrooge McDuck, uncle to Donald Duck and an immigrant to America. Not unlike so many Scots throughout history. He also shares several other stereotypical Scottish traits such as being a miserly old… well scrooge and being somewhat of a persona for you’re a-typical elderly Scottish gent. Voiced in Disney cartoons and films by (you guessed it) a Canadian voice actor named Alan Young, Scrooge became most famous to more recent generations (having been created in 1947) in the cartoon Ducktales where he was as cheap and skin-flinted as ever.

Finally, a Scotsman played by a Scotsman. It just so happens though that the character is a heroin addict and all round ‘colourful’ character. Played by Ewan McGregor in his first major role, the story follows Renton in his quest to rid his life of drugs and get a new start in life. With a stellar cast of other great Scottish actors such as Robert Carlyle and Jonny Lee Miller this is a somewhat visceral insight into the Scottish drug culture.

Connor McLeod from the Highlander

As they say in the movie; ‘there can be only one’. Yep one bad accent and one seriously bad sequel, but at least in this movie the Scotsman is portrayed as the brooding and deep hero with a dark past. Bizarrely, his mentor in the movie is an Egyptian/Spaniard played by the true Scotsman Sean Connery while the Scottish character himself is played by an American born, Swiss raised Frenchman. Oh well, at least that’s not as bad as making him an alien in the sequel.

So that’s it, and this is supposedly how the world sees the average Scotsman. In the interpretation of Hollywood the Scots are somewhere between a miserly old codger, a heroin addict and a Canadian?

Jim Anderson is a film buff who loves to see Scottish characters show up in movies. He’s recently had his Edinburgh apartment kitted out with a home cinema system.