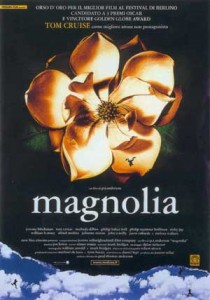 I spend a lot of my free time out in the garden, but the late night hours are devoted to watching movies in my home theatre. While I don’t often get a chance to combine my two loves, I am drawn to any film with the name of a flower in the title. If you happen to share my passions, here are 10 movies with floral titles to add to your queue.

War of the Roses – Michael Douglas and Kathleen Turner star in the dark comedy about a married couple who come to loathe one another. Danny DeVito co-stars and directs.

Curse of the Golden Flower – Chow Yun-fat and Gong Li headline this beautiful Chinese epic about murder and intrigue in an ancient royal court.

The Rose – Bette Midler received an Oscar nomination for her screen debut as a 1960’s rock star who slowly wilts under the pressures of fame and fortune.

White Oleander – A teenager (Alison Lohman) lives with a number of foster families while her mother (Michelle Pfeiffer) does time in prison for murder.

Five More Movies with Flowers in the Title

The Name of the Rose – Sean Connery is a Franciscan monk called upon to solve a murder in a 14th century Italian abbey. Christian Slater co-stars as his apprentice.

Broken Flowers – After getting an anonymous letter informing him that he has a teenage son, a middle-aged man (Bill Murray) begins tracking down his former girlfriends (which include Jessica Lange, Tilda Swinton, and Sharon Stone).

The Purple Rose of Cairo – A lonely housewife (Mia Farrow) goes to the movies during the Great Depression and falls in love with the movie character (Jeff Daniels) who steps off the screen. Directed by Woody Allen.

Harrison’s Flowers – A French film about a noted photojournalist (David Strathairn) who’s presumed dead while covering the Croatian War of Independence, and the wife (Andie MacDowell) who undertakes a dangerous journey to find him.

Since you’ve read this list of 10 movies with floral titles, you have no excuse for not checking out at least a couple of them. The movies above range from historical mysteries to modern-day tearjerkers, so there’s a little something for everyone.

Violet Van Cleef writes for DeliverRoses.org. Many of her articles help readers learn to be a florist.