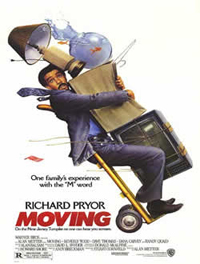 Moving: Richard Pryor plays an engineer from New Jersey who finds that he must relocate after losing his job in this 1988 film. His new employer is in Idaho and just getting there is the least of his problems. It turns out that the movers he hires are ex-convicts and the person he has drive his car across the country has multiple personalities. Anyone that is experiencing what they think is a horrible move will feel much better after watching what Pryor’s character goes through!  These guys should have hired FlatRate movers.

Cheaper By The Dozen: In 2003 the phrase ‘cheaper by the dozen’ took on new meaning with this movie starring Steve Martin as the father of 12 children moving from the country to the city. The movie  uses each character’s perspective to examine the move and the feelings of the family. Families of all sizes will appreciate this feel good movie.

Funny Farm: No list concerning movies about moving would be complete without this 1984 film starring Chevy Chase. The comedian plays a sports journalist that quits his job to move to the country and write a novel. Hilariousness ensues when Chase’s character has interactions with the locals and the wildlife around his new home. If you really need a laugh after your move, this film will have you in stitches, (especially if your new neighbors are a bit odd).

Beverly Hillbillies: Who doesn’t remember the classic television program (and movie remake) about a poor mountain family whose patriarch struck oil while hunting? His bullet strikes the ground and crude oil rushes to the surface, instantly turning Jed Clampett into a millionaire. He and his interesting family move to Beverly Hills, creating havoc for everyone that meets them. In 1993 a remake of this classic came to theaters starring the late Jim Varney as Jed.  Feel free to add your favorite movies about moving in the comments section below.

This guest post was provided by FlatRate movers.   These NYC movers can help you with residential and long distance moving, providing an up-front all-inclusive price.