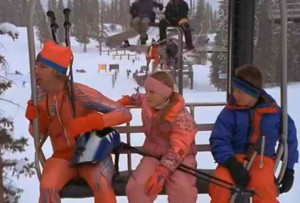 The Sylvester Stallone film, Cliffhanger features the Cortina ski resort but the film doesn’t feature a lot of skiing as it focuses on mountain climbing. Aptly then the film was shot on set in the Cortina d’Ampezzo area of the Dolomites, Italy. Further filming took place in Durango, Colorado. The film also features the most expensive aerial stunt ever performed during which a stuntman crossed between two planes at an altitude of 15,000 feet (5,000 m).

Aspen is an extremely popular party ski resort in America and is featured in the classic Jim Carrey film Dumb and Dumber. Most of the second half of the film is set in Aspen, as Jim Carrey’s character Lloyd hunts down the girl of his dreams. Cue making snowmen and snow angels, bad skiing and getting your tongue on ski lifts, ouch!

The majority of the slapstick comedy, The Pink Panther was filmed in the Cortina d’Ampezzo ski resort which is located in a region of Italy called Veneto.  The film sees Peter Sellers as the bumbling Inspector Clouseau and Claudia Cardinale as an Indian princess. Cortina d’Ampezzo in the Italian Dolomites. The Cortina resort is famous for hosting the Winter Olympics in 1956. The resort is known for serious skiing and in well regarded as being full of posing skiers in the surrounding restaurants and bars.

Downhill Racer which stars Robert Redford is set in numerous ski resorts and prominently features the Lauberhorn at Wengen in Switzerland, and the Hahnenkamm at Kitzbühel in Austria. The film also included Megève in France and St. Anton in Austria. Filming of the sequences in Austria clashed with the making of the George Lazenby James Bond film On Her Majesty’s Secret Service.

So ski resorts have featured in films about super spies, agents chasing international diamond thieves and steroid pumped up action heroes as well as bumbling comedy fools. Seems like there is a ski resort for everyone out there so strap on your skis and hurtle down the slopes!

Jonathan is a freelance writer who enjoys skiing and watching flims at home with his feet up!