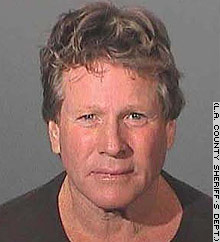 Zero Effect‘s actor Ryan O’Neal was arrested over the weekend at his Malibu home for allegedly assaulting his son.

The police as well as the paramedics were called to O’Neal’s home around 12:30am Saturday “regarding a battery that had occurred,” stated a Los Angeles County sheriff.

“Deputies determined … Griffin O’Neal, his son, had been assaulted by his father,” the sheriff continued.

65-year-old O’Neal was arrested for assualt with a deadly weapon as well as negligent discharge of a firearm, later he was released on a $50,000 bond.

It is, as of yet, unclear why the elder O’Neal would have accosted his son, but Ryan’s manager claims that his client was defending himself after his son  began “wildly swinging a fireplace poker.”

“It is unfortunate that what should have been an internal family disagreement was escalated to the point that Ryan felt he had to defend himself from Griffin’s aggressive, extremely menacing physical behavior,” stated O’Neal’s manager.

Whatever the real circumstances turn out to be, it reveals yet again that Hollywood never sleeps.