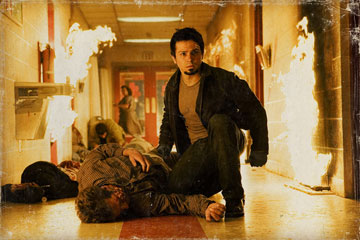 The British comedian/actor is completely appalled that the film is being split for its European release.

Pegg reveals, “It is f**king ridiculous. It is a brilliant film and it really annoys me that they have kind of got the knives out for him (Tarantino).

“I think there was a slight miseducation of the great American public about what Grindhouse was and what it meant. It is a big cult movie really and because it didn’t have a great weekend splash everyone is saying it is a flop.

As we all know, because we reported it here, Grindhouse producer Harvey Weinstein said that “a revision of U.K. release plans (will) allow audiences the chance to see the films separately.”