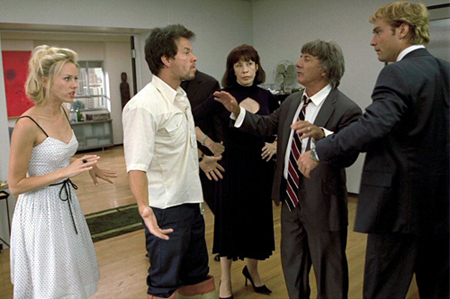 Remember that Lily Tomlin behind the scenes video from last month, where the actress went ballistic on the set of I Heart Huckabees?

Well, costar Dustin Hoffman is finally speaking out about the incident, saying that Tomlin was a pain to work with on the movie & that she picked on everyone but costar Mark Wahlberg.

The video, see it here if you missed it, shows Lily going off on director David O. Russell on the set of the 2004 film.

“Lily told everybody to f**k off except me. And Dustin, being the ball-buster that he is, said, ‘How come you didn’t say f**k you to Mark, huh? Are you scared that he’s going to kick your ass?,'” Wahlberg revealed.

“That movie was a whole other experience. David is a unique guy and making movies can be difficult. And Lily was just upset. The cameras are rolling, you’re doing the scene the way it was written, and he’ll just say, ‘That sucks, try this!’ Which can be tough.”

Well, you would think with as much acting under her belt that Lily has, she could have acted in a more professional manner.