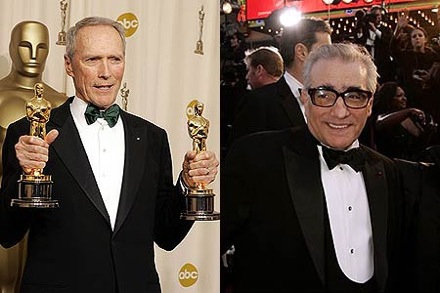 Famed director & actor Clint Eastwood speaks about the upcoming Amademy Awards & who might beat him in the Best Director prize.

This year Eastwood’s Letters from Iwo Jima is up against Martin Scorsese’s The Departed.  Two years ago it was Clint’s Million Dollar Baby that took the Best Director award away from the highly touted Scorses film, The Aviator.

Eastwood states, “He (Scorsese) probably has a good chance–there is a lot of sympathy for him–but I have no control over any of that.

“I always feel sorry … for the others, because there are other nominees and they’ve worked very hard on their projects, too. I don’t think any two people should be singled out.”

Martin Scorsese’s films have been nominated seven times and has yet to win a Best Director Oscar, poor thing.

You tell me- Does Martin have a chance over ole Clint?