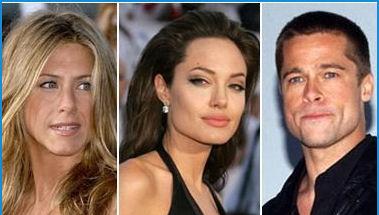 In the world of celebrities, the awkwardness level between Brad Pitt & ex-wife Jennifer Aniston has seldom been reached.  After Pitt’s alleged affair with sex bomb Angelina Jolie, a rift occurred between Brad Pitt & team Aniston, especially with Jen’s BFF Courteney Cox.  But it looks like it might just be forgive & forget time.

Dirt‘s Courteney Cox & Babel‘s Brad Pitt called somewhat of a truce Monday at the Golden Globe Awards dinner.  Cox & her hubby David Arquette were close pals of Pitt when Jen and he were married, but have seldom talked since the Angelina Jolie business & the messy divorce.

Apparently at the Golden Globes Cox & Arquette approached Pitt on a balcony setup for the smokers of the house.  Pitt responded by giving Cox a bear hug & saying, “Hello, sweetheart. It is so great to see you!”

The trio talked it up for a while, talking back & forth about their children.  At one point, Brad quipped, “We did Finding Nemo, but they’ve been off that for a while. We have a five-year-old!”

Angelina Jolie, who was standing some feet away, eventually worked up the nerve to say hello before she led Brad back to the party.  Maybe that is what explains Jolie’s morose attitude at the Globes.  I wonder what Jen made of the whole thing….

You tell me- Were you happier with a Jennifer Aniston/Brad Pitt or the new team of Angelina Jolie/Brad Pitt?