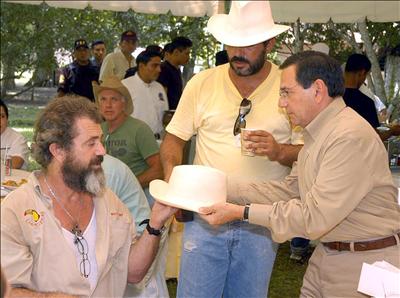 Fresh off his Mexico-based movie Apocalypto, director/actor Mel Gibson is thinking of heading down to Panama for his next movie.

Panama officials stated Monday that Gibson may indeed be asking permission to film in the Central America country.  Sunday night the Signs actor diner with Panama spokesman & acclaimed singer Ruben Blades who apparently suggested that Mel’s next project ought to be a remake of the 1950s film noir Panic in the Streets, a film about a doctor & cop who only have 48 hours to locate a murdered infected with the bubonic plague.  Sounds interesting.

However, Jose Serverino, a Panamanian filmmaker, revealed Monday that he was in negotiations with Gibson to produce a film about Spanish explorer Vasco Nunez de Balboa.  Well, whatever the next Gibson project, it does sound like it’s going to involve the country of Panama in one way or another.