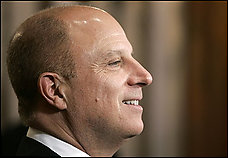 TV mogul & HBO head honcho Chris Albrecht was arrested on Sunday in Las Vegas for reportedly assaulting his girlfriend.  I thought what happened in Vegas, stayed in Vegas….

Apparently the HBO chairman assaulted his girlfriend in the wee hours of the morning Sunday right outside the MGM Grand Casino after watching the big fight Oscar De La Hoya and Floyd Mayweather, Jr.

A police source revealed, “Some of our guys observed a domestic dispute between him and his girlfriend. It was a physical confrontation.”