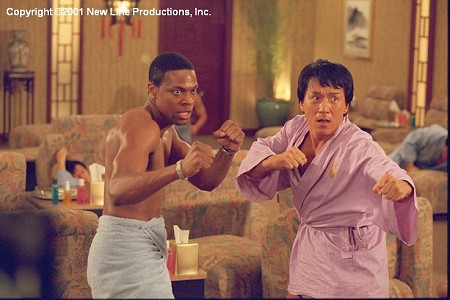 Martial arts guru & actor Jackie Chan has re-injured his chest while filming a fight scene for the coming movie Rush Hour 3.  Apparently the injury was not a major one, according to the famous action star.

52-year-old Chan originally injured his chest back in March of this year when a stuntman, who was wearing the wrong shoes (oops!), kicked him during a scene for recent comedy Rob-B-Hood.

This time, while shooting the third installment of the Rush Hour movies, Jackie was struck by a re-inforced steel table.

Jackie has been cleared by doctors of any broken bones, so Chan’s just left with a little pain.

“I was in a lot of pain because it was in the same spot where I had gotten hurt during the filming of `Rob-B-Hood,'” Jackie revealed.

Well, if it’s Jackie Chan, I’m not worried.  The man can bounce back after being hit by a car!

The Brett Ratner-directed Rush Hour 3 is set for release the middle of next year.  Best luck to Jackie, and watch out for those steel tables!