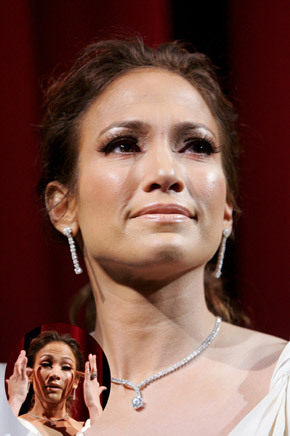 While there were many films to be joyous about at this weekend’s 57th Annual Film Festival, but the movie Bordertown was certainly not one of them.

Premiering at Berlin, Jennifer Lopez’s new movie was not received with open arms, rather booing & jeering is what the audience thought of Lopez’s most recent attempt at acting.

According to reports, Bordertown premiered to the sounds of boos & jeers, much to J-Lo’s disappointing tears.  The movie stars 37-year-old Lopez in the role of an American journalist reporting on several murders near U.S.-owned factories in Juarez & El Paso.

Lopez, who has starred in flops such as Gigli & Jersey Girl, was very much hoping that this new film Bordertown would prove her as a serious actor.  But it doesn’t so much look like that’s what happened, Bordertown rather proved J-Lo more of a flop than previously thought.

You tell me- Should Jennifer Lopez just go ahead & stick with singing & dancing, while leaving acting for the professionals?

Thanks to Us Weekly for the weepy image.