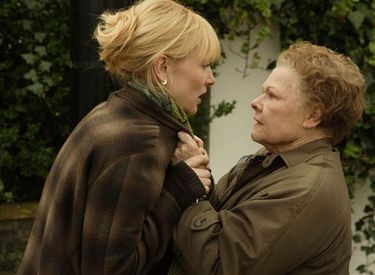 English actress Judi Dench is quite convinced that she will not win Best Actress at the Academy Awards this year.  Dench is so sure of the loss, that she has advised film gamblers to bet on another actress.  Are there really such things as film gamblers?  How odd.

Dench has confirmed she will miss this month’s Oscar ceremonies due to an upcoming knee surgery she has scheduled.  Dench has been nominated for Best Actress for her role in Notes on a Scandal & competes with fellow Brit Kate Winslet, Penelope Cruz, Helen Mirren & Meryl Streep for the Oscar.

Ms. Dench revealed, “Don’t put any money on me because you’ll lose.

“The thing about the Oscars, it’s strange because in the theatre you would say, ‘Break a leg.’ I can’t because I’m to have a knee operation. I can’t go to the awards. I’m going to have my leg broken and put back together.

“I will watch and cheer from my bed.”

I dunno, Judi.  I still might bet on you yet.  Any takers?

Who do you think will take home the Best Actress Oscar?