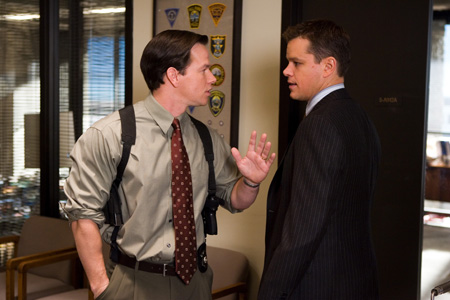 It looks like a couple of Hollywood’s young men can’t seem to get enough of each other.  After The Departed, Boston-born actors & lead men, Matt Damon & Mark Wahlberg are set to star in a new film about infamous boxer “Irish” Micky Ward.

Paramount Pictures is pulling out all the stops to speed filming on The Fighter (clever title, eh?) which focuses on Massachusetts-born boxer Ward’s unlikely chance at the world lightweight title.

The history on this character “Irish” Micky Ward is that he had a series of very tough losses to fellow boxer Arturo Gatti which are said to be the best & most brutal fights in the past 50 years.

So, before I reveal who’s playing who, would you pick Damon to play Ward or Wahlberg?

If you said Mark Wahlberg, you would be right.  Mark will take on the role as Micky Ward, with Damon playing the role of  Ward’s half-brother, Danny Ecklund, who battled drugs & crime to be Ward’s personal trainer.

House‘s executive producer Paul Attanasio is working on a rewrite of the script & The Boxer should start filming in Massachusetts this summer.