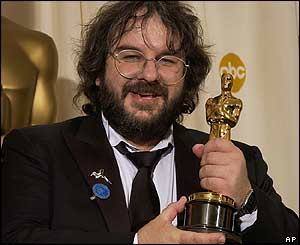 Bob Shaye, the head of New Line film studios, says that director Peter Jackson will never be allowed to direct The Hobbit while he is head of the company.  Do I hear an unexpected death coming New Line’s way?

Peter Jackson & his production company Wingnut Films are currently in a royalties dispute with New Line over The Lord of the Rings trilogy.  I wonder what Tolkien would make of all this bickering?  Apparently the lawsuit has enraged New Line & boss Shaye so much that they will never allow Jackson to direct his much loved The Hobbit.  Bad news for some, good news for others.

Shaye reveals, “He’s got a quarter of a billion dollars paid to him so far, justifiably, according to contract, completely right.

“And this guy… turns around without wanting to have a discussion with us and sues us and refuses to discuss it unless we just give in to his plan.

“I don’t want to work with that guy anymore. Why would I? So the answer is, he will never make any movie with New Line Cinema again while I’m still working at the company.”

Lord of the Rings stars like Ian McKellen & Elijah Wood have already rushed to the side of Jackson, expressing their disappointment.  I dunno, though guys.  I know that some of you feel pretty passionate about Jackson, but he does kinda sound like an ass.

You tell me- Whose side are you on, New Line or Peter Jackson?