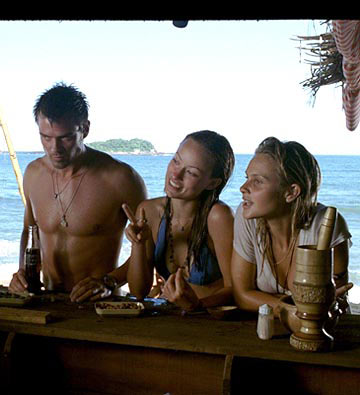 Well, any horror movie that takes place in your country, you’ll probably not going to love.  it’s just not good for tourism, you know?  And Brazil feels that same way about the new horror film Turistas.

Brazil’s State Tourism applauded U.S. movie critics for bashing the film in which tourists to the country basically get slaughtered, I won’t ruin it for you too much.  SPOILER ALERT!  The John Stockwell-directed movie shows American backpackers attacked & mugged by locals which are taken with the beautiful bikini-lad ladies of the country, only to find themselves drugged with “caipirinha” cocktails.  Once the drink begins to take effect, a crazed surgeon removes their internal organs for a trafficking ring the locals are running.  Whew, that probably isn’t going to be good for tourism!

But there’s really nothing Brazil can do legally, since it is just a movie and not reality, right Brazil?  You’re not really removing the internal organs of backpackers to your country to sell them on some local trafficking ring, are you?  I’m just saying that was a mighty defensive response to Turistas if you ask me.

Tell me- What did you make of Turistas?