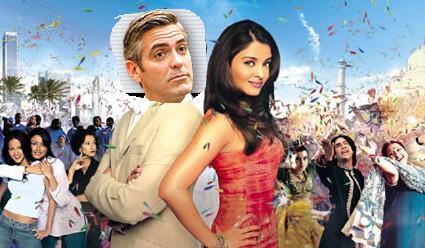 The winner of the Sexiest Man Alive title, George Clooney, wishes to star in a Bollywood movie.  Clooney loves the idea of appearing in one of India’s spectacular song & dance films.

Clooney reveals, “I’d love to. There are some filmmakers whose films when you see (them) you say, `That could be an interesting story to tell.”

George is surprised & delighted that the Indian film industry has done so well, saying, “I was watching a film the other day and the music was just amazing. It’s become such a huge industry.”

“There is a small market in the (United) States as of now, but it will be fun if it catches on because it is such a positive way of looking at filmmaking and I really love that. I truly think it’s fun.”

“It seems like the Indian filmmakers are pushing boundaries in terms of pushing the censors. I think it’s (Bollywood) an interesting place for filmmakers to go,” Clooney went on to say.

Interestingly, good ole George Clooney is a favorite amoung the middle & upper classes of India, one of their most popular English-speaking movies being Syriana.

Clooney’s new film The Good German, which looks fantastic, is coming to U.S. theaters December 22 & will be released in India in early 2007.

You tell me- Can you see George Clooney starring in a Bollywood picture?