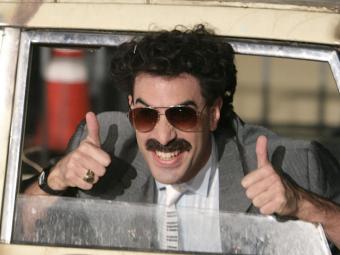 The lawsuit was filed by the two men several weeks ago & it’s now up to Los Angeles Superior Court Judge Joseph Biderman if the suit holds any credence.  The two unnamed frat boys were shown in the movie making racist and sexist remarks.  Their stance has been that they were tricked into acting a fool & blame Borat for making them seem, well, racist & sexist.

The lawsuit claims the men suffered “ridicule, humiliation, mental anguish and emotional and physical distress, loss of reputation, goodwill and standing in the community”.  Well, duh.  Making comments like that won’t get you far!

An lawyer for 20th Century Fox feels sure that the defense will prevail.  “We’re confident that we’re going to prevail,” attorney Louis Petrich stated.

“We don’t think the lawsuit has any merit. We don’t even agree with them on the facts.”

Yep, me either. It would be like Mel Gibson saying that the arresting officers caused him to make anti-Semitic remarks.

You tell me- Do the frat brothers have a solid case?