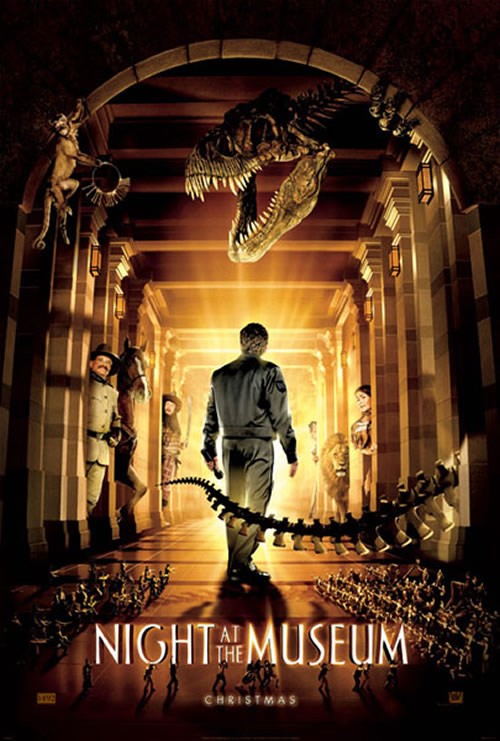 Recently Hollywood.com caught up with Night at the Museum actors Ben Stiller & Dick Van Dyke for a little bit of Q & A.  Here’s the scoop:

Hollywood: Dick, you are very selective in what you do in this stage in your life, so why did you choose this project?

Dick Van Dyke: Well, it was a coup. This question answers itself: there was so much talent. I’ve been a fan of Ben’s for so long.|

Ben Stiller: What? You’ve got that backwards.

DVD: Some of the best thing in my life have been when somebody said, ‘Why don’t we get him to do it?’ [Ben and director Shawn Levy] thought of me and called me and I said “I gotta be in this movie.” It’s a classic family movie. It’s right down my alley, except for the fact I get to play a bad guy, which I love. But, he’s not a really bad guy. The way I rationalize it is what he’s trying to steal, anybody would which is eternal life and eternal youth and anybody would steal for that. And he turns out to be an okay guy, but I get to sneer and leer at Ben a lot and I got a kick out of that. And I get to beat him up, too.

Hollywood: With movies like this one and Madagascar, are you trying to find movies for your kids? Have they asked you what “Focker” means?

BS: No, I have not had my children ask me. I have not had my daughter say “Focker” yet. Let’s keep that from happening for as long as possible. No, I just think I’ve become more aware of these kinds of movies. I actually started working on Madagascar before my daughter was born. I mean, they take so long to do. I think you just become more aware of it, because when you have kids you want to be able to go to movies and take the family, too, and actually all enjoy together. And I don’t think there are that many great live-action family movies that everybody can enjoy, so, that’s what was exciting to me about this one. When I first heard the title, I thought, “Wow, that’s a great idea.” I grew up near the museum of natural history. I just felt a gut reaction that I really would love to be a part of this movie. As a kid, I would love seeing this movie and I thought as an adult, the kid in me would love to see this movie, too.

HW: Ben, what was it like working with the monkey?

BS: Yeah, I guess there are a lot of screen teams—sometimes they’re on screen and they have good chemistry, but off screen they don’t get along. I’d say that’s sort of what me and Crystal had. First of all, she’s a female monkey and she’s playing a guy, so I think she already had a chip on her shoulder about that. And she wears a diaper and I think she resents that she can’t control herself. And then she got to hit me as hard as she wanted. She was encouraged to hit me very hard. And she had this way of doing it when she connected that was really annoying. I couldn’t hit her back. And when it came to my close up I’d get the monkey puppet to hit, or the green tennis ball. It isn’t satisfying. I have unresolved issues with Crystal. And if I see her now, I’d probably want to smack her.

Hollywood: Dick, do you have a secret to staying young?

DVD: I think I picked the correct ancestors, for one thing. I dunno. I’ve always kept singing and dancing. I do a lot of exercise–swim and work out with the resistance and stuff. When you get to my age you have to or you’ll freeze up like the tin woodsman. Just keep moving is the idea, and don’t eat too much.

BS: Dick is incredible. I mean, the dancing–I think there were two or three times when I turned to you and said, “You’re 80? Really?A I don’t believe you.’ And also the character is sort of working there to keep him young. So, I think there is a portrait of Dorian Van Dyke somewhere in the closet.

Hollywood: When you look back at some of your early movies on television, what do you see? Is it like looking at an old home movie or?

DVD: Well it’s funny, we were talking about that the other day–someone of my generation. If I look at something I’ve done recently, I just die for myself and I’m critical and I pick it apart. But if ten years go by, and I happen to see it on television, I go “That wasn’t too bad.” Isn’t that funny? You forget all the problems you had.

BS: It’s like looking at someone else. It’s so far in the past.

DVD: I forgot all the mistakes I made.

Holl: Ben did you learn anything about history from the film?

BS: Well I learned to speak Hun, which was great. And that is actual Hun. It’s ancient Hun so you really can’t check it. But, y’know, I love history, I’m very interested by it and I think it’s great to have a movie that brings it alive in away. It’s sort of that romanticized version of it. But that’s sort of like what you get into when you’re a kid, and then when you’re older you can learn the realities of history and then get depressed that more people have died in the name of god than anything else, and all that stuff. This is the fun version.

Hollywood: Would you like to see your work preserved in a museum of film?
BS: I think Dick would definitely be in a museum of movies. He’s already got a couple of classics there–more than a couple. I don’t know [about me]. I mean, I think time only tells what lasts and what doesn’t. You just don’t know what’s going to last.

DVD: I think this one is going to be around a long time.

BS: It just happened coincidently that my daughter just started watching both Chitty Chitty Bang Bang and Mary Poppins before we started working together, and for me it was almost like a weird sort of sign—and those movies do last. I’m still seeing a therapist from the child catcher in Chitty Chitty Bang Bang. Still have nightmare of that guy. These movies have a huge affect on you when you’re young so it’s great to be able to be a part of something and work with someone who’s so great.

Hollywood: What is it about a movie like Mary Poppins that makes it so lasting?

DVD: Well I think it was Walt Disney who just had the touch. The child in him or something. He knew how to entertain children and how to get through to them. I’ve often thought wouldn’t he be like a man in a candy store if they had computer graphics back then? Walt would have gone crazy with that.

Hollywood: Chitty Chitty Bang Bang and Mary Poppins both turned into successful stage musicals. Have you seen either?

DVD: I have not. I understand Chitty Chitty Bang Bang closed. They said this car was the main star. But I hear Poppins is great. They wrote some new songs. I’ve always thought, particular Poppins would make a great stage show. I kept saying all through this shooting that Night at the Museum would make a great musical. I would say right here, here’s a spot for Attila the Hun to sing a song.

BS: You’d be the only actor who could take it to the stage. Everybody else would be replaced by people, you know, who could sing and dance.

Wow, that was at the same time informative & hilarious, they only way Ben Stiller & Dick Van Dyke can deliver,

You tell me- Is Night at the Museum a lame movie?  Is that where you’ll be on Christmas Day?