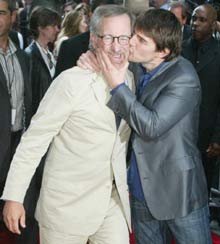 Steven Spielberg was one in several celebrities who partied with newlyweds Tom Cruise & Katie Holmes this weekend.  After a lavish Italian wedding, TomKat hosted a marriage celebration event for those who were unable to make it to the Bracciano Castle ceremony.

One star celeb that was notably not at the Beverly Hills bash was talk show host Oprah Winfrey, we all remember that couch-jumping show, right?  Winfrey’s rep confirmed that Oprah had indeed not been invited.  What gives, TomKat?  Why you didding the Oprah?

You tell me- How long will TomKat last?