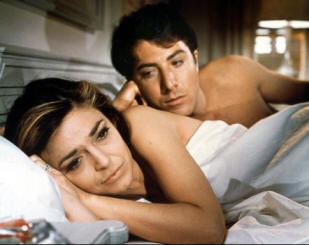 Dammit all to hell, it would have been perfect!  Actress Demi Moore & husband/fellow actor Ashton Kutcher have both snubbed doing a Graduate remake.  Grrrrrrrrr.

44-year-old Moore had originally expressed some interest in her & her 16-years-younger husband Kutcher doing the remake of the 1967 film.  The original Graduate starred Anne Bancroft & Dustin Hoffman in the awkward love affair between an older woman & a much younger man.  We all thought that Demi & Ashton, who deal with this situation daily, would have made a great team to do the film.

But, sadly, Demi has passed.  And what Demi says goes, apparently.  The reason why Moore & Kutcher have passed on the film is because they fear what might happen to their relationship if they were to work that closely together.

Demi reveals why she passed on The Graduate, saying, “Real couples being on screen together never seems to work.”

You tell me- Are you totally devastated that Demi Moore & hubby Ashton Kutcher will not be doing The Graduate together?