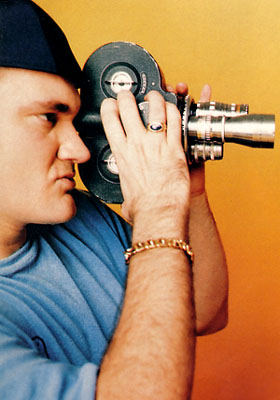 Quentin Tarantino is suffering from a severe case of hubris, the director believes he may once have been William Shakespeare.  Can I get a ‘yeah, right!!’?  Thank you.

The Pulp Fiction director feels that he was born to write & even goes so far as to suspect he is Shakespeare reincarnated.

Tarantino reveals to GQ magazine, “I’ve always had a thought maybe that I might have been Shakespeare in another life.

“People have written lots of pieces about the parallels of my work and Shakespeare.

“I remember in the case of Reservoir Dogs, writing this scene where the undercover cop is teaching Tim Roth how to be an undercover cop, and when the actors came in to rehearse it, Harvey Keitel read it, and he thought I had just taken Hamlet’s speech to the players and broke it down into modern words.

Hilariously Quentin also feels he was an American black slave as well as a Japanese gentleman in his former lives.  My, has Quentin Tarantino been a busy, busy boy!