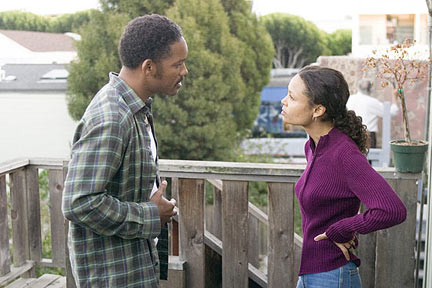 Jackie Medina, the woman who Thandie Newton played in the recent movie The Pursuit of Happyness, is angry that she was portrayed as a sex-obsessing & cruel mother in the film.

The movie focuses around the life of Chris Gardner (Will Smith) who struggles to raise his son on the streets of San Francisco after being abandoned by his partner Jackie Medina (Thandie Newton).   Gardner eventually turns his life around & amazingly becomes a multi-millionaire stockbroker, providing himself & his son a better life.

And now Gardner’s former partner Medina is furious about how the movie did an injustice to her, portraying her as an abandoning, loose woman.

Medina states, “This is a film. It has nothing to do with reality. It is not a documentary. It does not document life. Of course they got it wrong. It’s an awful movie. I am a consulting a lawyer to see what I can do.

“This is not fair at all. I’ve been to see the film and I hated it. This story is not about me. My big worry is that as Will Smith is so popular in America and this film is such a big hit, everyone will be against me. What chance do I really have?

“This film was a real low point for Will Smith in my opinion. I thought much better of him. Now…everyone is talking about this. But what can I do?”

Face the truth, honey & bite the bullet of American film.  Poor lady, she could have been a happy millionaire as well…..  But maybe that’s what she’s aiming for now with that attorney.

You tell me- Does Jackie Medina have a right to be angry at her portrayal in the movie The Pursuit of Happyness?