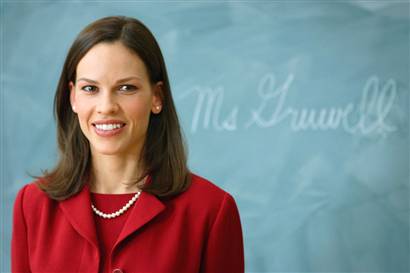 The reason I chose the title for this post the way I did is because the most interesting part of this news, to me, is that actress Hilary Swank never graduated high school.  Wow, you just never hear of people doing that these days.  Way to be different, Hilary!

Anyhoo, U.S. schoolteachers have been given free passes to see the new movie Freedom Writers starring Swank herself.  Starting Friday schoolteachers can see the film gratis as AMC Entertainment, Inc. cinemas for a week.  So, as a schoolteacher you don’t get paid much, but at least you get to see a free movie, right?

According to an AMC rep, the company is trying to show their appreciation for teachers, saying, “We hope this (offer) will help express our sincere gratitude and appreciation for all that teachers do, often with very little thanks in return.”

Freedom Writers focuses on an idealistic English teacher (Swank) who is trying to overcome racial intolerance at her high school in Long Beach, CA.

Interestingly, the movie originally failed to get teacher moviegoers interested since they were apparently unhappy that Swank had been cast for the role, seeing as how she never graduated high school herself.  What an odd thing, to be mad at casting an actress for something she never did.  It seems like that would be acting in itself.  I suppose we cast Charlize Theron in Monster because of her tendency to kill folks?  Silly people, silly people.

Freedom Writers has already taken in $26.5 million at the box office & it is currently at fifth in the most popular film this week.

You tell me- Should we really be rubbed the wrong way that Hilary Swank was cast for this role?