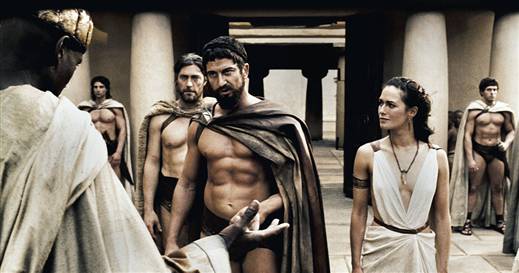 Well, tell me something I don’t know.  According to recent reports the Greek epic film 300 is suppose to blow everything else out of the water this weekend at the movie theater.

Director Zack Snyder super-stylized movie, set in 480 B.C. & covering the infamous Battle of Thermopylae, should open this weekend in the $50 million range.  The only drawback film industry prognosticators see is the fact that the Frank Miller movie has an R rating.  Which, too bad, so sad, I am very happy with.  I don’t think you could ever make a true Frank Miller without at least an R rating, if you do it right.  Are you listening Dark Knight?

300 has received round-the-clock praise due to fans seeing the midnight showing of the film on Thursday.  300‘s apparent success has also been boosted by their aggressive use of MySpace as well s an official site loaded with video journals, production blog & concept art.

With a little hope, 300 will more than likely be the second or third highest opening film ever for opening in the month of March.  Currently Ice Age: The Meltdown holds the record with $68 million & while the original Ice Age has the #2 slot with $46 million.  OK, people, we cannot let a movie such as Ice Age hold this record any longer!  Get out there this weekend & kick some wooly mammoth ass!