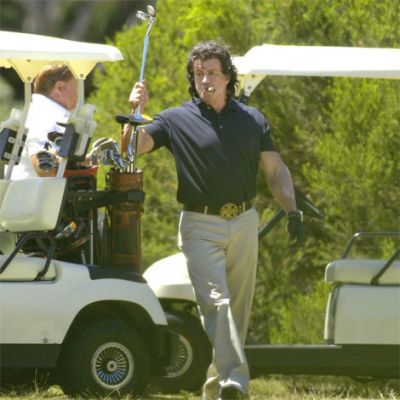 You know, for a Mensa member, Sylvester Stallone is acting rather dumb.  Old man Stallone may be in some serious trouble with Australian authorities regarding banned bodybuilding substances.

The Rambo actor was in Sydney for the Australian opening of his new film Rocky Balboa last Friday night when he was stopped by Australian customs officials after a routine X-ray spotted something rather suspicious.

Sly & entourage were detained for several hours, actually missing the film’s premiere, due to Stallone packing in his luggage what is believed to be a type of human growth hormone.  Well, how else did you expect old man Stallone to take on the role of Rocky yet again?  He’s like my grandpa & my grandpa would have needed a city-size luggage full of steroids.

Good ole Sly at first told the media that the incident was all a “misunderstanding” & that rumors of him transporting illegal substances were “totally hot air.”

Stallone even joked with custom officials that he had packed a “giant cheetah” in his luggage as well as saying that the officials might find his wife stowed away in his luggage.  But after the evidence piled up, Sylvester took on a more serious tone, saying, “I do know [he was detained], but I can’t tell you. To [customs officials] it’s major, but it’s really minor stuff. I just made a mistake … I misunderstood a few things, and we are going through the process.”

On Monday, three days after being detained, officials searched Stallone’s hotel room as well as his private jet for illegal substances.  Richard Janeczko, one of the investigators, stated that some banned items were seized, but did not give any more details.

Although Sylvester was allowed to fly out Tuesday night, if he is found guilty of banned substances charges, Stallone could face up to five years in jail as well as pay several thousands of dollars in fines.

Silly Stallone.  Couldn’t he have been just a little bit smarter?  Please enjoy this image of Stallone out on the golf course in Sydney on Sunday.  Wonder if there’s anything interesting packed into that cigar of his…..

What do you think- Are you surprised about this Sylvester Stallone steroid news?