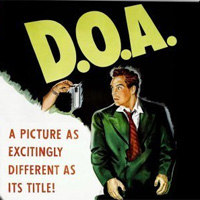 I recently  re-watched the movie D.O.A. – the 1950 version starring the underrated Edmond O’Brien (I don’t acknowledge the 1988 remake even though I’m a Dennis Quaid fan).  About halfway through it occurred to me just how sad the story was and probably for the first time, I felt real sympathy. I not only felt bad for Frank Bigelow, our very reluctant hero, but also for his lady friend Paula who would never even get the chance to be called his widow. I’m sure I’m not giving anything away here by telling you that it doesn’t end well for these two (see movie title) but I never really got the tragedy of the story until I viewed it again as an adult.
But I suppose a little back story is in order. Growing up, my dad introduced me to all kinds of old black and white films to include everything from Jimmy Cagney classics such as Angels with Dirty Faces and White Heat to lesser known Bogart films like Across the Pacific. I suppose since I first watched these as a very young girl, some themes didn’t really gel for me until I got a little older and was able to understand why Cagney screamed like a coward at the end of Angels. Which takes me back to D.O.A.

The first few times I saw it, my dad and I always used to be more interested in the side players, those great character actors who really gave color to the story and provided us with endless movie quotes. We used to laugh at the scene where Bigelow finds out that he was poisoned and how the doctors deliver the news. We couldn’t wait for the scenes where Chester keeps hitting him “in the belly” (although writing this now, I’m realizing how sadistic it was!) But it wasn’t until this last viewing that we really got a sense of just how sad it is for Bigelow and Paula, that they’ll never get the chance to continue their relationship, and they really love each other. The phone conversations between them, where both Bigelow and the audience know he’s doomed but she has no clue are really tough to watch and even weirder that both me and my dad experienced the same thing. We didn’t laugh at our usual points and at the end of the movie we were both amazed by how heartbreaking the story really was, as if we’d never seen the movie before.

Many movies have re-watch value, especially comedies, and of course we all experience different emotions as we grow, but try watching a movie you loved when you were younger and see if it still holds up today. I still love D.O.A., but I wonder how I’ll feel when I watch it again in my twilight years. I wonder if I’ll still laugh at those scenes as I did when I was younger… I have a feeling I will.