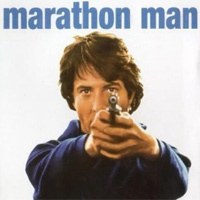 It’s often been said that Hollywood is out of fresh ideas, therefore, old flicks are constantly getting refashioned.  But many movies, ones that DESERVE to be remade, have been left alone.  Our new series will highlight movies that the Filmsy gang would love to see get a second go at the box office.  Your feedback is encouraged.

Topping the list of fear for many of us is a trip to the dentist’s office.  So when “Dr.” Szell wields a drill with evil intention’s in the 1976 Dustin Hoffman thriller Marathon Man, the anxiety level rises.

Nazi war criminal Szell, played by a stellar Laurence Olivier, is determined to find out if graduate student and avid runner Babe (a young and naive Dustin Hoffman) knows if the government is monitoring his illegal stash of “blood” diamonds stowed in a  safe deposit box.  Unbeknownst to Babe, his brother is a U.S. government agent, hence his implication.

Why is this movie ripe for a remake?

1) It was both a critical and financial success.  Aside from scoring several Oscar nominations and a Golden Globe win for Olivier (Best Actor), the film also scored $22M at the box office.

2) The fictional character of Szell continually lands on “worst villain” lists.  The scenes where he tortures Babe by drilling his teeth without any anesthetic are shocking, scary and memorable.  People of all generations, even if they have not seen the movie, are familiar with the torture scenes.  With all of the advancements in dentistry technology, think of the gruesome possibilities!

3) While nothing will be able to touch the venom between Nazis and Jews in post-WWII times, the movie could be adapted to the modern day and center around the current war on terror.  With a focus on hatred and greed, the movie is, unfortunately, timeless.

Who should be cast?

Forget Hollywood agents and big pay days, which actors do you think could do Marathon Man justice?

What do you think about Tobey Maguire as Babe?

Or, do you think this classic should just be left alone?