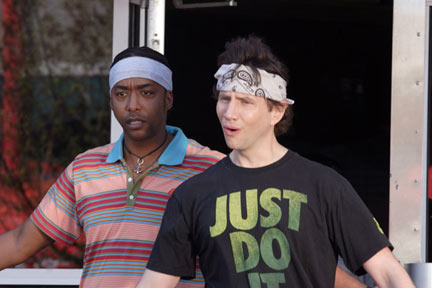 When I was in elementary school, every year we would have a mandatory dance unit in gym. Half the kids would be assigned square dancing and the other half would be assigned break dancing. By some bizarre twist of fate that can only be explained by our dimension overlapping with the Twilight Zone, I got stuck with square dancing six years in a row. By the sixth grade I was pleading with my gym teacher to let me do the break dancing unit, but there was just no reasoning with that man-hating dyke.

Well, after watching “Kickin’ It Old Skool” I have finally realized that break dancing is only one-tenth less humiliating than square dancing. I missed nothing.

In 1986, Justin was a twelve year-old break dancing prodigy. However, while attempting to perform a back flip, Justin landed on his neck and thrust himself into a coma for twenty years. Now, Justin (Jamie Kennedy) is awake and ready to bust a move. His heart throb from 86, Jen (Maria Menounos), is going to marry his arch nemesis, Kip (Michael Rosenbaum), and the bank is planning to foreclose on his parents’ house. In order to win the girl and the money, Justin will have to reunite with his childhood break dancing crew, the Funky Fresh Boys (Miguel A. Nunez Jr., Bobby Lee, Aris Alvarado) and win a break dancing tournament. There’s only one problem: they’re all 30-something losers and Justin’s brain is still that of a 12 year-old’s.

When going into a Jamie Kennedy movie, you expect a certain level of crap. However, Kennedy actually managed to top himself, this time. If Lion-o of the Thundercats were to see this movie he’d most likely call it “crap beyond crap”. If Optimus Prime had been in the theater with me, he probably would have shouted “more crap than meets the eye”. If John Matrix from “Commando” was sitting next to me, his final one-liner would have been “let off some crap, Bennett!” Okay, okay, I was reaching with that last one, but you get the idea, right?

When the 80’s nostalgia wave splashed down in the early 2000s, no one could predict that it would last this long. Well, it honestly hasn’t. It pretty much fizzled out a few years back. “Kickin’ It Old Skool” is trying to ride a trend that’s only still being followed by middle-aged toy collectors on the internet.

“Kickin’ It Old Skool’s” major problem, aside the fact that it should’ve been released four years ago to cash-in on the 80’s revival fad, is that it just isn’t funny. The movie’s idea of humor is “hey, look, a flux capacitor! Remember those!? From Back to the Future!?” It gets tiresome very quickly. The rest of “the funny” stems from Jamie Kennedy trying to act like a twelve year-old trapped in a thirty-two year-old’s body. The jokes which stem from that awkwardness are more embarrassing than funny. You know, the kind of jokes that make you scrunch down in your seat, look from side to side and wish you were anywhere else on the planet but there.

Even more embarrassing is the romance between Kennedy and Menounos. Kennedy’s character of Justin isn’t an endearing sort of “child trapped in a man’s body”, he’s a full blown ret-…”mentally handicapped person”. Watching Menounos making out with him in the back of KITT was just unsettling.

I will give the movie some credit; it featured the best random cameo by David Hasselhoff since “the Spongebob Squarepants Movie”.

“Kickin’ It Old Skool” is one of the worst comedies I’ve seen all year. Almost as bad as “Norbit”. Watch at your own risk.

Oh what the heck. One more. If Michelangelo from the Ninja Turtles had been in the theater with me, he would have shouted “Crapabunga!”