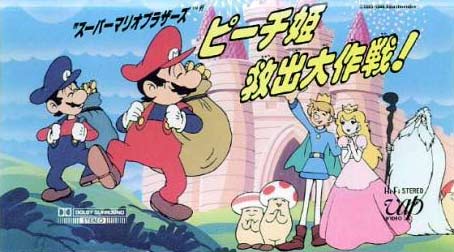 Believe it or not, back in the “good ole days”, America wasn’t the only country coming out with cartoons based on Nintendo’s iconic Super Mario Bros. In 1986, Grouper Productions (the same people who brought us Hello Kitty and her extended cast) came out with this OVA film which loosely adapts the storyline of the first Super Mario Bros. video game for the NES. Video cassettes of this anime can be rather hard to come by, and those that show up on Japanese auction sites can go for several hundred dollars. But god bless the internet: I watched it for free!

Well, the premise is the same, though the story diverges in some key ways. Mario and Luigi are two brothers who own and operate a grocery store in (what appears to be) California. One day, while staying up late playing his NES, Mario is surprised when a beautiful Princess named Peach jumps out of his television and begs for his protection. She is immediately followed by the monstrous turtle-dragon, King Koopa, who effortlessly tosses Mario aside and kidnaps the Princess. The next morning, Luigi is skeptical of Mario’s story until a bizarre caterpillar-dog-thing enters their store and steals the locket Peach left behind. The Mario Bros chase it down a pipe and wind up in the strange world of the Mushroom Kingdom. Upon arrival, a mystical Mushroom Hermit charges them with the task of saving the Mushroom Kingdom from King Koopa’s tyranny and rescuing Princess Peach!

While some differences are immediately noticeable, the basic story is for all intents and purposes intact. Some changes are rather wacky, though. For instance, Luigi wears yellow and blue as opposed to his green and blue duds, and rather than act like a craven coward like he does in the games and in the American cartoons, he is instead a greedy sunuvabich. Good thing for him he winds up in a world where all you have to do is smash a rock open and gold coins fall out. Then there’s King Koopa. He’s much less sinister in this anime than in the US cartoons or even the more recent video games. His voice is rather whiney and high pitched (as opposed to the growly dragon voice we’re used to) and he’s kind of annoying. Probably the most perplexing change is that the character known as Toad in the US, along with all the other Mushroom Retainers, are girls. Noodle that one.

As far as the story goes, the OVA is aimed at kids rather unashamedly. It’s cute and funny, but only a little bit so. Some of the gags will have you smiling, but it’s a kid’s flick through and through, so don’t expect any “laugh out loud” moments. It probably could have been dubbed by the Super Mario Bros. Super Show cast and brought over to the US and fit in perfectly. As far as the animation goes, it’s no great shakes. It’s pleasant and not riddled with errors, but it isn’t what I’d call “visually stimulating”. It’s pretty much on par with all of Grouper’s Sanrio/Hello Kitty stuff.

I don’t mind it being a kid’s movie. I like kid’s movies. So that’s not what bugged me. No, what irked me was the over-the-top, “you’ve gotta be kidding me” product placement done throughout the film. At random instances, Mario with hit a block and Super Mario Brand Ramen will pop out and he’ll eat it and talk about how delicious it is. They even interrupt the final battle with King Koopa to hurl in some product placement. It’s rather annoying.

Overall, it’s a fun piece of obscure Mario media that’s worth watching, but not worth the insane prices it goes for online. Just about everything from the first Mario game is represented, from Lakitu and Spiney’s Eggs to the Hammer Bros. There’s even a nice twist ending that kind of breaks your heart (or Mario’s, at least). And fans of Super Mario 64 will instantly recognize the inspiration for the King Koopa boss battle from the climax of this film. But anyway, this OVA is only going to appeal to the hardcore Mario fans out there, and its limited availability doesn’t make it very accessible to a casual audience.

And because I couldn’t find any other place to mention this, there’s a scene where Mario kills a Buzzy Beetle with a fireball. You can’t do that!