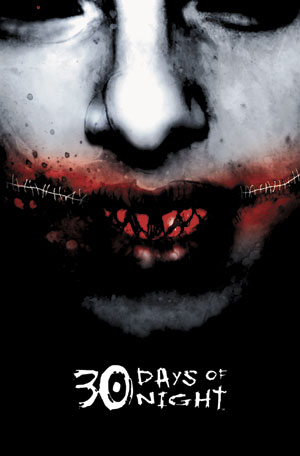 I remember picking up the graphic novel of Steve Niles’ “30 Days of Night” several years ago and thinking “Man, this would have been a lot better as a movie”. Indeed, the idea seemed to be to turn it into a movie as soon as it was published, only it’s taken until now to finally have that intention realized. And just as I suspected, the film version of “30 Days of Night” is mostly superior to its comic book counterpart, but does that make it any good? Well, to be frank, the comic wasn’t all that good to begin with. A decent idea and some freaky art, but I found the whole thing to be wholly overrated. While I enjoyed the film to an extent, and found it to be a better interpretation of the story than the source material, the end result is none-the-less mediocre.

Point Barrow, Alaska, the northern most point of the United States, undergoes thirty days of darkness each year. As soon as the sun sets, the town finds itself under siege by a horde of hungry vampires, ready for a month-long feast. Eben (Josh Hartnett), the town sheriff, and his wife, Stella (Melissa George), are left to gather as many survivors as possible and try to ride out the thirty day massacre without being found. Not so easy, as Point Barrow is a small town and the vampires don’t want to leave any trace once they’re finished.

I’ve only ever read the first graphic novel for “30 Days of Night”, and while I thought it was pretty good, it didn’t impress me enough to indulge in the myriad of sequels that came afterward. My primary issue with the comic was that it was far too condensed. It was supposed to be a tale of survival, but that aspect of the story was played down in favor of an action-packed opening and climax. The movie adaptation, thankfully, focuses heavily on the small group of townspeople struggling to keep hidden from the bloodthirsty ghouls out to get them.

The movie also did away with a few aspects of the comic that I thought were kind of, well, stupid and/or lazy. The subplot about the voodoo cult in New Orleans trying to get video evidence of the vampires is nowhere to be found, which is fine by me, as it felt completely tacked on and unnecessary in the comic. Also, the generic evil vampire overlord who shows up at the end to berate the leader is also left out, which didn’t bug me at all, considering that was a fairly mundane deus ex machina, anyway.

So ultimately, these changes coupled with the less-condensed story-telling are what left me with a more satisfied feeling after watching the movie than when I read the comic. But source material aside, what was the movie really like? Fairly boring, I have to confess. The shaky-cam effects were terrible, making a lot of the more violent action sequences a chore to follow, if you could follow them at all. Only about three or four members of the band of survivors have anything even remotely resembling character depth or personality, leaving the rest as little more than cows for the slaughter. A horror movie standard, I know, but they still didn’t do anything for me.

“30 Days of Night” is more an action flick than a horror movie and isn’t particularly scary. Most of the scares revolve around loud noises and the usual “jump” gags we’re all so tired of. I’ll admit that the vampires themselves are more entertaining than the prissy goth crybabies a lot of vampire flicks make them out to be, and are nicely gruesome, but still no great shakes. The artwork in the comic was very surreal which is what lead to its unsettling quality. These vampires are just guys with really sharp teeth that like to shriek way too much (the shrieking, by the way, gets annoying very quickly).

“30 Days of Night” is a good adaptation of the comic and actually an improvement, but it really only takes a mediocre graphic novel and makes it slightly less mediocre. I didn’t hate the movie, but it seemed more like something I’d rent or wait until it hit TV.