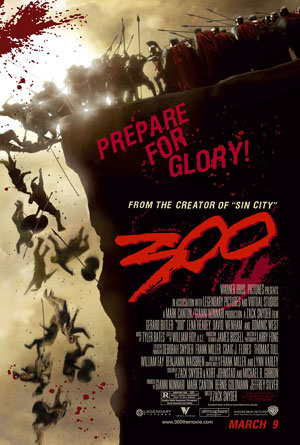 Despite being a self-proclaimed comic book nerd, I have to confess that I never read Frank Miller’s “300”. Hell, I never even considered reading it as I felt there were more interesting comic books I needed to plow through first. After seeing the motion picture adaptation, I must say, I regret my decision. “300” is a gorgeous spectacle of blood, brutality and an engaging story all woven into one.

“300” recounts (albeit with an artistic license) the battle of the three hundred Spartans against the whole of the Persian Empire. King Leonidas (Gerard Butler) is the ruler of Sparta, a land known for its fierce warriors who bow to no one. Xerxes (Rodrigo Santoro), the King of the Persian Empire, has come to annex Sparta…over Leonidas’ dead body. Leonidas assembles three hundred of his mightiest warriors and marches to a bottle-necked canyon on the coast. There, the three hundred Spartans are bombarded by the thousands of Persian warriors, yet through their grit, determination and superior skill, they give the Persians a run for their money.

Visually, “300” is something of a blend of “Sin City”, “Troy” and “Silent Hill”. It has, of course, the epic Greek carnage of “Troy”, but portrayed in a heavily stylized (though not as heavily stylized) method similar to that of “Sin City”. Yet tossed into the mix are a blend of bizarre freaks and frightening imagery so repulsive you’d think you were watching “Silent Hill”. Strangely, this odd mish-mosh of visuals combines together into something truly glorious to behold.

The movie wastes no time getting into the thick of battle. After a brief prologue illustrating the hardcore childhood of King Leonidas, and of course a sequence setting up Xerxes’ impending takeover, the battle is quickly under way. Nearly the entirety of the film consists of the Spartans impaling the crap out of freakish Persian warriors, making “300” mostly one big fight sequence. This does wonders for the adrenaline-pumping “holy shit” factor, though I think it had a bit of a negative impact on characterization. There are 300 Spartans fighting this battle, but we only get to know about four of them particularly deeply. There is a subplot going on with Leonidas’ wife, Gorgo (Lena Headey) trying to urge the Spartan Counsel to send the rest of their army to support the three hundred but it still felt a little thin.

So yes, I’m afraid that what you’re going to come out of this film praising are the visuals and the violence, not so much the story depth (though it’s a very engaging story, it’s not all that layered). Now, this movie is quite nuts. It seems half of the characters are deformed elephant people; hideous freaks of nature with unholy fighting skill. Just wait until you see Xerxes’ elite guard, the Immortals. The effects add monstrous touches even to animals we’ve seen a thousand times, like wolves, rhinos and elephants. What I found so interesting about that is the narration of the film is from the perspective of Dilios (David Wenham), a Spartan, and he refers to these animals not as “rhinos” and “elephants”, but as great monsters hauled back from the darkest reaches of the Earth. Like a Spartan had ever seen a rhino before. To them, these things were monsters, so that’s how the audience sees them.

The movie is a visual marvel, and while the story isn’t exactly a multi-layered complexity it is still very fascinating. Characterization is a bit thin and it could have stood to be a little longer, but overall my complaints are few. Guys will love it for the hardcore action, ladies will love it for the hundreds of shirtless men with their chiseled abs.