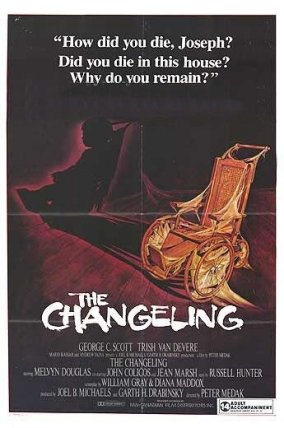 An often forgotten haunted house picture, though in all honesty, not particularly memorable. It’s a much more “classic” haunted house film, before the likes of Poltergeist came along and introduced boatloads of special effects and adrenaline-pumped action into the genre. The problem with the Changeling is not the script, the direction or the acting, but just that it isn’t very scary.

After his wife and daughter are killed in a tragic car accident, composer John Russel (George C. Scott) moves into a creepy Seattle-based mansion. Eerie things begin to happen fairly quickly, as John feels a presence within the house is trying to communicate with him. John discovers an attic bedroom boarded-up within a closet, and after some investigation, learns it once belonged to a crippled young boy in a wheelchair. A mystery unfolds, as John does much sleuthing to discover the reasons behind the boy’s murder. However, every day, the spirit within the house grows more restless and more violent.

George C. Scott delivers a magnificent performance in this film with his role enhanced by the quality of the script. The mystery behind the boy’s death and how it ties into a senator is all very intriguing and keeps the audience’s attention admirably. Scott’s character is constantly uncovering clues and putting pieces together, with the ghostly happenings coming across more as a secondary part of the story used to build tension.

There is only one major problem, I suppose. The scares in the Changeling, well, aren’t very scary. They rely mostly on slamming doors, loud noises and disembodied voices. All very unnerving, yes, but done so much better in films like the Haunting and the Amityville Horror. The séance recording is one of the better moments, as John discovers the voice of the murdered child speaking to him through a tape. But still, it’s all rather tame. The only real moment of heart-pounding terror happens at the film’s climax, where the boy’s cobwebbed wheelchair springs to life. To the film’s credit, that is an excellent scene. Regretfully, it’s just about the only truly scary moment in the entire picture.

The Changling isn’t a bad horror film, and it’s an excellent mystery-suspense movie, it’s just not all that scary. At least until the end, that is. I’m afraid the Changeling gets a B-.