They should’ve Fired the writers.

For what the trailers indicated about the movie’s plot, it fully delivered; a story about a man who’s family has been taken hostage by a posse of criminals, and his only way to save their lives is to help the evil-doers rob the bank he works for.

It delivers, sure…but what it also delivers a hackneyed, predictable story that hits every action movie cliché squarely on the noggin rather shamelessly. The lead villain has the stereotypical silly European accent (which must mean he’s EVIL), the one henchman with a heart may or may not try to redeem himself at the end, the rebellious teenage daughter hates her father at the beginning of the film but may or may not respect him after his display of loving courage, the “Average Joe” hero begins the movie as a regular guy but somehow manages to outwit and outfight a group of highly trained professional crooks…etc. 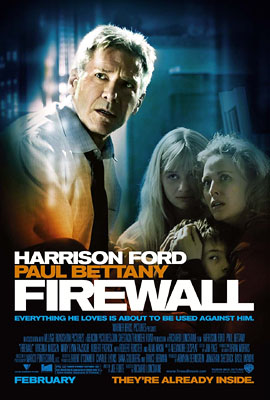 And that brings me to the second glaring annoyance. Harrison Ford begins the movie as your “Average Joe” white-collar employee in his early 60’s, thrown into a horrifying situation and completely helpless against his captors. Yet he bizarrely metamorphoses into Rambo for the climax of the film, bursting through glass windows and engaging in rowdy fisticuffs with Evil European Stereotype #237b, who’s quite obviously half Ford’s age and should very well be twice the fighter some geriatric office employee is. Ford’s sudden transformation at the end is particularly out-of-place, even as a predictable action movie convenience, as the director seems to make it a point to show the audience that Ford is a feeble old man, constantly stumbling over furniture and tumbling down hills and winding himself over the briefest of action sequences.

So what’s good about it? Not much. It isn’t one of the WORST movies I’ve ever seen; it’s just utterly forgettable. Robert Patrick has a small role in the movie, and it’s always fun to see him. But even his character is a paper-thin 2-dimensional cut-out never achieving more than “I’m the grouchy boss who disagrees with the hero of the story and doesn’t care about employees or customers…cheer when the hero gives me lip and punches me at some point!”

The movie DOES flow together well, is rarely incoherent, and makes use of seemingly pointless references early on and ties them into the plot at the end to prove their value. The only “WTF?” question I was left with was “Why would the crooks bother kidnapping the dog in the first place? It’s just a dog!”

Basically, this is the kind of dime-a-dozen action movie they parody on South Park every Wednesday night, and usually with twice the entertainment value. Sure, it wasn’t as bad as “Day After Tomorrow”, but that’s still a level which isn’t easy to sink to.

Firewall’s the kind of generic action thriller, that if you brought your girlfriend to see it, she’d break up with you on the drive home.

I give it a D+. Harrison Ford has been on a serious dry-streak these past few years. It might be time for him to either throw in the towel, pick his scripts more cautiously, or just step-out of the action hero-role gracefully (if it’s not too late).