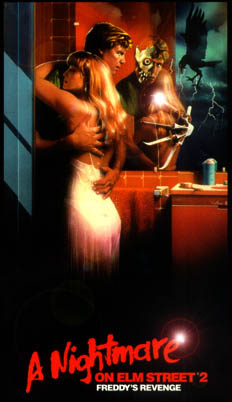 Generally one of the more reviled installments in the Nightmare on Elm Street franchise, though I tend not to agree with that notion. I find “Freddy’s Revenge” several degrees more entertaining/less annoying than the likes of “the Dream Master” or “the Dream Child”. It may not be the best installment in the series, but it *is* one of the most different and an occasionally refreshing alternative to some of the more cut and dry Freddy movies which tend to stagnate in their own predictability.

Five years after the events of the first film, the house on 1428 Elm Street has finally been purchased. Jesse, a high schooler, is having terrible dreams about Freddy Krueger. His friend, Grady, and his girlfriend, Lisa, try to tell him its all in his head, and honestly, they’re right. Freddy wants to worm his way into the real world, and possessing Jesse’s body is the way to get there. Gradually, Jesse loses his grip on reality until eventually Freddy takes over for good.

One of the first things you might realize after you finish watching this flick is that Freddy doesn’t kill a single person in the dream world; all his killings taking place in reality. That aspect alone makes this film a very different Nightmare on Elm Street and, of course, is one of the reasons it garners so much negativity from fans. Still, even after Freddy is removed from his more familiar surroundings and placed in the real world the outcome isn’t that different. Freddy still racks up a healthy body-count. As Freddy’s hold on Jesse becomes more powerful, his power over the real world becomes stronger as well, leading into some dream-like sequences toward the end. This concept: the stronger Freddy is, the stronger his hold on Springwood, would become a key element in future Nightmare films, particularly “Freddy’s Dead”.

There are plenty of memorable scenes in the movie; some of Freddy’s finest. The transformation sequence in Grady’s bedroom is a classic. I particularly like the bit where you can see Freddy’s eyeball peering out of Jesse’s mouth, or the way the claws sprout from his fingertips. Another classic scene is the pool party. Very intense and it even has one of my favorite Freddy quotes; “You are all my children, now”. But probably the best scene in the movie is the ending in the boiler room. Very surreal, with monster animals prowling all over the place and it gets especially good when everything catches on fire. This movie has some superb special effects.

Also, many people don’t agree with Freddy’s motivation, as in other movies you discover he likes being the dream killer and doesn’t want to be human again. That’s very true, and I still think it pertains to this movie, as well. Freddy likes causing mayhem and murder in any way, shape or form. Freddy wanted inside Jesse’s body as it meant he’d have access to kill anybody he wanted. Even after he’s “defeated”, he just goes back to the dream world to start all over. So, basically, what it all boils down to is Freddy taking over Jesse’s body for the sole purpose of screwing with him. And I think that’s awesome. That’s exactly the sort of thing Freddy would do because he’s just that sort of sadistic creep.

Then, of course, you can’t talk about “Freddy’s Revenge” without having to mention the homo-erotica and metaphors for puberty. Honestly, I’d much rather not, but it’s sort of a requirement for reviews of this film. Basically, there’s lots of homoeroticism between Jesse, Grady and their S&M-loving gym coach, and the whole thing of Freddy changing the body of a teenage boy into a monster is supposed to reflect overactive hormones and all that stuff. Honestly, it can get rather annoying/embarrassing.

“Freddy’s Revenge” isn’t *great*; Freddy-himself still lacks a personality since the whole comedian-shtick hasn’t happened yet and plot-wise it really is the oddball of the series. Still, I’ve found that I began to appreciate it more after I’d seen every film in the series and thus had the luxury of viewing the films in any order I choose. It’s different, but in a refreshing sort of way.