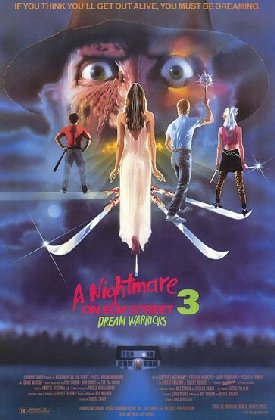 A Nightmare on Elm Street 3 is quite possibly as essential to the popularity of the Nightmare on Elm Street franchise as the original film. While the first one introduced the plot and the characters, part 3 introduced Freddy Krueger as we know him; the one-liner spewing comedian/serial killer. Freddy was decidedly without much personality in the previous 2 films, only showing the occasional glimpse of dark humor. Part 3, however, transformed the character into an American icon.

It’s been over 5 years since her encounter with Freddy Krueger, and Nancy has grown up, becoming an expert in the field of dream studies and nightmares. Nancy understands there is a threat to the teenagers of Springwood: Freddy Krueger. She heads to a psychiatric clinic where several teens have been locked up for evaluation; most of them considered potential suicides. It seems the kids have been having chronic nightmares, and in an attempt to rid themselves of the pain, have been going without sleep for weeks at a time. Nancy arrives to teach them how to control their own dreams and defeat Freddy Krueger in his own playing field.

Usually considered the second best film in the franchise, as well as often being referred to as the “true” sequel to the original (Freddy’s Revenge not having been well received). The Dream Warriors was written by Wes Craven, writer and director of the first film, and his presence in the story and script is immediately felt. The return of Heather Langenkamp and John Saxon also adds to that sense of this being a “real” sequel to the original. Although Langenkamp would only star in a total of 3 Nightmare on Elm Street films (with Wes Craven’s New Nightmare actually taking place in a different continuity), the character of Nancy is considered Freddy’s arch-nemesis. The “Loomis” to his “Michael Myers”, in a way.

This film introduced much of what would become Nightmare on Elm Street staples, such as the outrageous and over-the-top dream sequences. The kills are insane and surreal and not something you can get with any old slasher film. My favorite would still have to be the “puppet” kill. Though the “Welcome to primetime, bitch!”-kill and the heroine-kill rank up there pretty high.

Part 3 also serves to give Freddy his greatest yet most grating quality: his comedic presence. Freddy is cracking one-liners left and right in this film, something he hadn’t done before. It’s really pretty funny in this movie, though admittedly, it *will* get tiresome. Freddy’s Dead: the Final Nightmare being particularly annoying. Never-the-less, it gives Freddy a more marketable and recognizable character quirk. Also, while most people feel the comedy is intended to lighten the horror of the kills or make Freddy less evil, in reality, it actually makes the movie and the lead villain a whole lot darker. Freddy revels and savors each and every murder, cracking jokes at the suffering of children. I find it much more sadistic than the standard Jason-approach of snapping someone’s neck from behind and then going along your merry way. Freddy’s methods are much more personal.

This movie also has several moments I adore, even if they don’t have any kills involved. The giant worm that attacks Nancy is awesome, as are all the stop-motion effects. I’m a sucker for stop-motion, admittedly, but the Freddy skeleton and Freddy puppet just looked so damn cool.

A Nightmare on Elm Street 3 is an essential installment in the series and honestly one of the best films the franchise has to offer. Unfortunately, it’s pretty much downhill from here until Freddy vs. Jason.