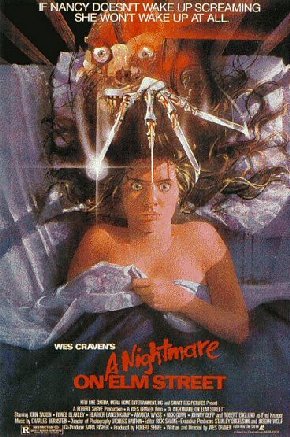 When most people think of Freddy Krueger, they think of the stand-up comedian version who makes more bad puns than kills. However, you’ll find little of that in the original installment of the franchise. The first Nightmare on Elm Street film isn’t a campy, silly slasher horror-comedy like the majority of the sequels. Actually, the first film is a legitimately good horror film with a strong story, unique scares and impressive actors. I’d rank it as highly as I would movies like the Exorcist or the Shining.

You should all know the overall story of a Nightmare on Elm Street, but I’ll regale you with a brief summary anyway. In the town of Springwood, Ohio, the parents are keeping a terrible secret from their children. A decade ago, they burned alive a serial killer named Freddy Krueger who had been set free on a technicality. Now, Freddy has come back from the grave, invading the dreams of their children and murdering them in their sleep. Nancy, your average high school girl, has to find some way to defeat Krueger or suffer the grisly fate of all her friends.

I’ll go ahead and say it: typically, slasher films are not scary. They just aren’t. They’re fun, they’re gory, they’re intense…but they’re never very scary. The original Nightmare on Elm Street is not a typical slasher film. It delivers a healthy amount of scares through a surreal, dreamlike atmosphere accompanied by eerie music and a genuinely frightening rendition of Freddy Krueger. Krueger is a vicious monstrosity, hardly cracking a single joke. His horribly burnt face is perpetually shrouded in darkness, giving him a mysterious quality. Freddy’s origin is excessively dark and the way he murders the teenagers is all-together shocking. This Freddy is nothing to laugh about.

Wes Craven pens a very intriguing tale of mystery and suspense; you’re not always sure when someone’s dreaming or when they’re awake. Craven takes full advantage of the possibilities of the “dream world”, allowing all kinds of impossible things to happen. Freddy can appear and reappear like a ghost, hallways lead to cavernous boiler rooms, sheep run around wild, and so on. Just about anything is possible in these settings, so you’re never sure what to expect.

The special effects are very impressive, especially for a 22 year-old low-budget horror film. Tina’s death is easily one of my favorite horror movie kills of all time. Many of the other effects, such as Freddy coming through a wall above Nancy, were done cheaply and easily yet remain just as believable had they been done with million-dollar CGI.

The acting in the film is excellent, to say the least. Heather Langenkamp plays Nancy with a remarkable amount of believability and emotion. Johnny Depp plays a throw-away character, Nancy’s boyfriend, but doesn’t do a bad job of it. He has a very memorable death, as well. John Saxon plays Nancy’s father, the lovable jackass. And then there’s Robert Englund. The original Freddy lacks the trademark comedic edge but Robert makes up for it with an eerie presence. Even out of make-up, there’s something about Robert that’s just…scary-looking.

The original Nightmare on Elm Street is a genuinely marvelous horror film, one of the essentials, and the only installment in the franchise I’d say you *have* to see. This film is certainly worthy of an A, a fantastic horror flick.