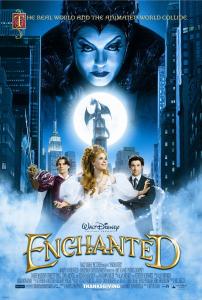 The half-animated, half-action movieÂ is a fairy tale about a young girl who meets & falls in love with a handsome prince.Â  Sounds like a familiar story line, eh?Â  Well, things transpire & the young girl finds herself not in her world, but our world, actually, to be more precise, in New York City of all places.

So, you can see the story developing, right?Â  If not, you have until November 21st of this year to think it over a bit more.