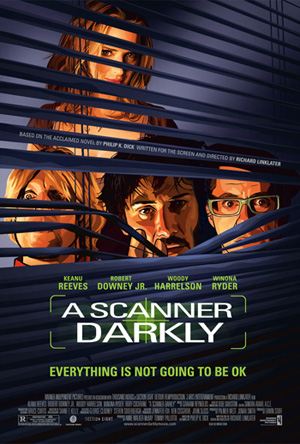 Now here’s a movie actually worth braving the horrors of the Art House Theater to go see. A Scanner Darkly is a very bizarre tale about drug-addiction which takes the audience about as close as they can get to a wacky acid-tripping experience without the threat of police brutality.

In this story, Keanu Reeves plays Bob Arctur, a normal guy who’s working undercover for the FBI in the future of 7 years from now. To mask their identities, he and his coworkers wear “scramble suits” which are constantly fluctuating between appearances of millions of different human beings, giving you no clear look at any one face. Bob lives in a house with 2 burn-outs, addicted to a drug called “Substance D”, which the FBI is desperate to destroy. It’s Bob’s job to monitor his roommates, interact with them (which even includes taking the drug, himself) and get the dirt on Substance D. However, to complicate matters, the FBI thinks that Bob Arctur is the head-honcho supplier of substance D but they don’t know that the guy they’ve hired to monitor Bob Arctur is in reality, Bob Arctur. But Bob Arctur isn’t the Bob Arctur they think he is but at the same time Bob Arctur, the real Bob Arctur, doesn’t really care about what kind of Bob Arctur the FBI thinks he is because all Bob Arctur cares about is getting wasted.

Those last few sentences probably parallel the coherency of this movie pretty accurately, as it does its best to extend the “drug-tripping” experience onto the viewer. The roto-scoping animation helps exponentially in that regard and gives the whole film a dizzying surreal effect. And I do mean dizzying. Everything is either constantly changing (the scramble suits are insane) or constantly moving, even stationary objects, which throws the viewer slightly off-balance for the whole movie. The film also throws in plenty of “WTF”-moments of the deeply creepy and insane variety, just to keep the audience scratching at their noggins. A Scanner Darkly fits perfectly in that “kinda scary drug-tripping movie” genre along with the likes of Videodrome, Naked Lunch and Jacob’s Ladder, though perhaps a bit more tame.

The movie has an excellently-assembled cast. Keanu Reeves is much easier to stomach in roto-scoped animated form, though honestly, who can play a sleepy burn-out junkie better than Keanu? Robert Downy Jr. plays one of the more entertaining characters, though you might get him confused with Jeff Goldblum for a minute, as he mimics the speech-pattern and mannerisms of the guy in question. Wynona Ryder plays her part well, though it could’ve been practically any actress in her place and it really wouldn’t have mattered. You’ve also got Woody Harrelson and Rory Cochrane as two other Substance D-addicted losers, who along with Robert Downy Jr., form the funniest aspect of the movie.

The humor in the film, much like everything else, is very bizarre and will get you laughing on a “What the Hell…”-level. The movie isn’t expressly a comedy, so don’t go in expecting a laugh-a-minute. But when the humor strikes it hits dead-on. A Scanner Darkly, as you can probably guess, is a tale of the dangers of drug-addiction and tries to invoke sympathy from the audience on behalf of junkies everywhere. The movie claims that it’s not always the junkie’s fault they’re hopelessly addicted, it depends largely on the circumstances, and that their addiction will be punishment-enough, in the end. I suppose that’s true, really, but I still don’t feel like giving that skin-head down the street five bucks every weekend so he can support his meth habit.

The movie is extremely “artsy”, so right there you know it won’t appeal to everybody. The plot is intentionally confusing and the animation might cause problems for those with motion-sickness. A Scanner Darkly is mainly going to appeal to people who liked movies such as Naked Lunch and Videodrome, which isn’t a bad thing in any way. I’d recommend it, though only to people interested in this sort of thing.