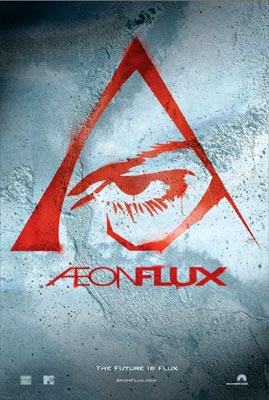 The slew of the absolutely mediocre to the painfully crappy continues with this review of Aeon Flux. First off, let’s just say what we know from the trailers: in some future utopia, something is amiss and there’s only one person, a hot stoic chick in tight leather with guns, who can make it right. Unless you’re a fan of science fiction that predictably projects dystopian societies and the rebels that have to fight against them (with guns and no facial expressions), there is nothing about this film that offers anything worth your time or money. Not that gloomy science fiction can’t be done right (Equilibrium, anyone?), but for the most part it’s a series of clichés that’s just waiting for something original to elevate it above the rest.

But let’s say you do watch Aeon Flux. Fine. As predicted, we are introduced to some post-apocalyptic city in the middle of a vast ecoscape where everything is nice and pretty and all the men, women, and children are dressed in heavily saturated, vibrant clothes (that’s how you know all is well). Of course, you have the ruling family of the city who supposedly control everything with unmatched tyranny. But (surprise!) you also have the rebels who want to overthrow them. Enter Aeon Flux (Charlize Theron), the latest hot babe super fighting cardboard cutout who can beat up, flip, and kill without messing up her hair or have anything more than a poker face the whole time. She’s sent to kill the head dude, Trevor Goodchild (Marton Csokas), but instead they end up porking. More chaos ensues.

So you know that there’s a secret, right? Right. The action is nothing but a delay of the inevitable, and even the surprise secret of the society is nothing new. To spoil it for you and save you the pain of having to review this movie yourself, here it is: everyone in the city is sterile, which means that for hundreds of years they’ve been cloning each other and impregnating the women during their checkups. The Goodchild family keeps on cloning themselves in the hope that one day they’d find a cure. Which doesn’t really explain why people like Aeon still remember their past lives (assuming that memories are not cloned, considering that no one else seems to be having weird dreams or visions), but then again we wouldn’t have that porking scene if she didn’t.