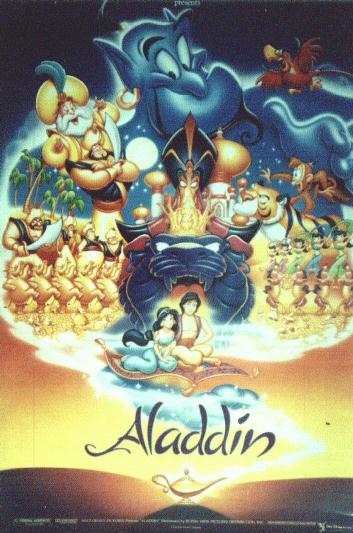 In the early 1990’s there came what is now called by many animation fans “Disney’s Second Golden Age”. Encompassing films such as the Little Mermaid, Aladdin, Beauty and the Beast and the Lion King, this new “Golden Age” showed a considerable spike upward in the quality of Disney’s animated features, which had taken a turn for the worse during the 80’s. Unfortunately, Disney quickly began to self-destruct with animated trash like Pocahontas and the Hunchback of Notre Dame, eventually spiraling so deeply into the pit of crap that they shut down their traditional animation studio in the early 2000’s, supposedly forever. Well, of the films produced during Disney’s short-lived “Second Golden Age”, Aladdin remains my favorite.

Aladdin (Scott Weinger) is nothing but a hopeless “street rat” in the Middle Eastern city of Agrabah; a thief, liar and con-man with no future to speak of. However, the dastardly Grand Vizier, Jafar (Jonathan Freeman), and his conniving per parrot, Iago (Gilbert Gottfried), need Aladdin, as he is the only one who can infiltrate the Cave of Wonders and retrieve a mystical lamp of untold power. Aladdin, who is hopelessly in love with the Sultan’s adventurous daughter, Jasmine (Linda Larkin), agrees to help Jafar in hopes of increasing his social stature. Aladdin’s greedy monkey, Abu (Frank Welker), screws up and both Aladdin and Abu wind-up buried alive within the Cave of Wonders. They find the lamp, and after giving it a quick rub, awaken the Genie (Robin Williams) within. The jovial Genie gives Aladdin three wishes, which the street rat intends to use to woo Jasmine. Things aren’t so simple, though, as Jafar will do anything to get his hands on the lamp and Aladdin’s recklessness might just be the key.

There are a few things I really like about Aladdin which I think set it apart from other Disney flicks. The first thing that comes to mind is the title hero. While most Disney heroes defeat the evil villain through physical power (Hercules, who defeats Hades by punching him in the face) or a special weapon (Prince Phillip from Sleeping Beauty, who defeats Maleficent by stabbing the bitch), Aladdin has few physical advantages to speak of other than natural gymnastic talents. Instead, he has to use his courage and his wits to topple a foe with the power of a god, and I found that to be rather impressive as a kid.

I was never big into musicals as a tyke. I liked some of the Disney songs, sure (I wasn’t that bitter as a child), but they didn’t get me all fired-up and dancing around like a retard. Except Aladdin. Of all the Disney films (save for maybe the Nightmare Before Christmas, which technically counts as Disney), Aladdin has the best music. Very upbeat, memorable and with a lightning-fast tempo, there isn’t a single forgettable track in the whole film.

Then there’s the voice acting. While Linda Larkin, Jonathan Freeman, Frank Welker and Scott Weinger all do excellent jobs in their respective roles, two actors steal the show: Robin Williams and Gilbert Gottfried. Williams’ performance as the manic, insane Genie remains one of the most memorable modern Disney characters to date. His song, “Never had a Friend like Me” is the best of the bunch, too. Future continuations of the Aladdin storyline via straight-to-video sequels and an animated series would see Williams replaced by veteran voice actor, Dan “Homer Simpson” Castellaneta (save for Aladdin and the Prince of Thieves, the only other time Williams played the character) who would deliver an equally humorous performance. Gilbert Gottfried is awesome as the vile Iago and almost outshines the real villain of the movie. There’s something about Gottfried’s voice that’s just addictively annoying. The second he starts talking he irritates the crap out of you but you just have to keep listening.

Along with the Adventures of Ichabod & Mr. Toad, Alice in Wonderland and Fantasia, Aladdin ranks as one of my all-time favorite Disney feature films (not including Pixar achievements, of course). A great family film most kids should enjoy, it gets a B.