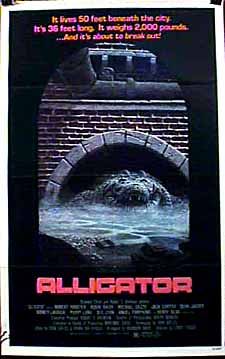 Did you know that long before the Sci-Fi Channel drove the sub genre into the ground with bundles of poorly conceived and poorly funded films, “giant killer animal” movies used to actually be pretty good? I know, a difficult concept to fathom, but it’s true! Coming only a few years after the most successful giant killer animal movie of all time, “Jaws”, was Lewis Teague’s “Alligator”, a movie about…a giant alligator. Cast and script aside, the flick has surprisingly good production values and an admirably convincing title monster (the FX are far more convincing than the ones seen in Spielberg’s classic, at any rate). With the film’s recent release on DVD, including remastered audio and picture (lord knows that grainy mono-fest needed it), now is as good a time as any to check out this often overlooked gem.

1968: a baby alligator gets flushed down the toilet and lands in the sewers. Meanwhile, a research firm illegally dumps genetically altered dog corpses down the drain pipes. The alligator feasts on the mutant puppy chow and in twelve years grows to be thirty-six feet long. Now, a cop (Robert Forster) and a reptile expert (Robin Riker) must team-up to stop this gigantic menace as it makes its way above ground and begins eating everything in its path.

I remember as a kid that I always liked the sequel, “Alligator II: the Mutation”, better. Probably because it had a mutant living in the sewers and I was admittedly a huge Teenage Mutant Ninja Turtles fan, back in the day. For whatever reason, I never paid much attention to the original installment when it came on TV. I kind of wish I had, in retrospect, as the flick really surprised me.

The effects used on the alligator (affectionately referred to as “Alexander” in the film) really impressed me. I was expecting a bad rubber prop or perhaps some shots of a live alligator walking down a blatantly miniature model city, but to my surprise the former was actually very impressive and the latter was mercifully brief. The alligator prop is remarkably convincing with lots of fluid movements and natural body language. Granted, the majority of the time all you’re really seeing is it’s gigantic maw swinging about, but that’s all you really need to see. Teague’s cinematography is worth a compliment or two, particularly his use of light and shadow in the scenes down in the sewer. One excellent scene involves Robert Forster and his cannon fodder buddy looking at a map as the alligator lurks menacingly just behind them, glimpsed for only a second in a brief flash of light. Very nicely done.

Now on to the bad. As fun as this movie is, there’s no denying it’s a “Jaws” rip-off. Right down to scenes shot through “Alligator-vision” as a melody vaguely similar to the classic “Jaws” theme plays in the background. The movie had enough positive qualities that it could have stood on its own legs without these blatant copycat tactics. Also, outside of Forster and Riker, the cast for the film is brutally painful. I found the police chief to be particularly irritating, though the textbook “evil mayor” and “evil old guy who runs a corporation” got on my nerves fairly quickly, too.

“Alligator” is one giant killer animal movie that’s definitely worth watching. Perhaps it’s not a masterpiece like “Jaws”, but in a genre so jam-packed with the worst garbage made-for-TV film studios have to offer, it’s refreshingly good.