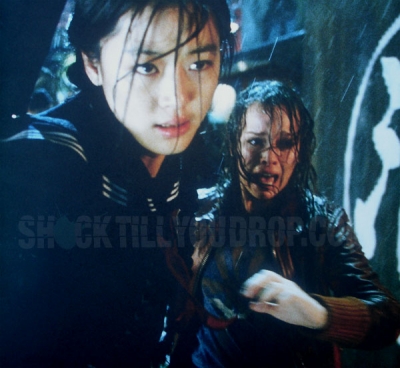 Blood: The Last Vampire became a cult hit when it was released a few years ago. Blood was a short anime video that captured the imagination not only of otakus but also horror, action and cartoon fans. It was well made (seamlessly blending traditional and 3D animation) and the story was quite intriguing. So intriguing in fact that it ended with so many questions left unanswered.

Now Blood is going to get the live action treatment with imminent release of the Blood: The Last Vampire live action movie. This movie will attempt to recapture the magic that the anime version brought to the screen. This is also going to be a notable film in that it heralds the Hollywood debut of Gianna Jun (Jeon Ji-Hyun), the actress who captured a lot of hearts in the absolutely delicious Korean flick My Sassy Girl (which is also being remade starring Elisha Cuthbert). It will be interesting to see if Gianna Jun will be able to work her magic with an American audience. Her girl next door image has made her a huge star in Asia. But with a markedly different role as the tough, samurai wielding Saya, we’ll see if her appeal will translate to westerners.

Blood: The Last Vampire is set to be released next year.